skip to main content
Return to Fordham University
You are at:Home»University News»New Cultural Internship Program Connects Students with Art, Science, History, and Social Programs
One of the internships open exclusively to Fordham students is at the New York Hall of Science in Queens. (Photo courtesy NYSCI)
For generations, Fordham professors have assigned coursework that required trips to the city’s museums and for years Career Services has placed students at the city’s top cultural institutions. But Laura Auricchio, Ph.D., dean of Fordham College at Lincoln Center (FCLC) and Maura Mast, Ph.D., dean of Fordham College at Rose Hill (FCRH), noticed that there had never been an official internship program that weaves the city’s cultural offerings with pedagogy—until now.

The Cultural Engagement Internships program kicked off last summer and hit full steam this past spring. Nearly a dozen cultural institutions have officially signed on to partner with FCLC and FCRH. Participating partners include the Bronx Book Festival, New York Hall of Science, and Elmhurst / Corona Recovery Initiative. 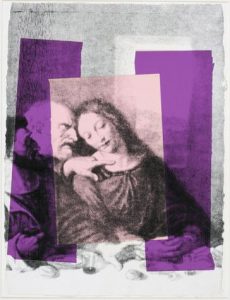 For two internships at the Brooklyn Museum students will help prepare for the “Andy Warhol: Revelation” exhibition. (Photo courtesy of the Andy Warhol Foundation).

“When I first got to Fordham I realized that, although we had some ties to the neighborhood, there were more opportunities to pursue in terms of our cultural connections,’” said Auricchio. “Our initial goal was to find ways to create equitable partnerships with institutions around the city, though we didn’t quite know what that would look like. So, I started literally going door to door.”

Auricchio said that she started introducing herself like a new neighbor, though she’s a life-long New Yorker. Both deans said they didn’t want the cultural partners “to have to jump through hoops” of paperwork and raise capital for students to get paid. They identified several alumni donors willing to fund student pay and to grow the program.

“Several alumni have stepped up to provide funding for the expansion of the program and they have also helped to connect us to new organizations,” said Mast.

When they began pitching the program to institutions, the pandemic had yet to hit. After lockdown, Auricchio noted that partner institutions were justifiably hesitant, as few were familiar with virtual work. Mast said that they helped partners navigate the new normal, but they also held tight to the initial academic goals of the program.

“For the virtual internships, we told our partners that we didn’t want our students doing the digital equivalent of making photocopies and coffee; we wanted them to have a robust experience, and it’s worked,” said Mast. “Our students have taken the lead on significant, complicated projects.  They have learned in the process, which is such a transformative experience for them.”

Last summer, current rising senior Macarena Leon worked virtually as a curatorial assistant for the Museum of Art and Design (MAD), when the program was just getting started.  A double major in English and new media and digital design, Leon helped conduct research for an upcoming exhibition, compiled artist biographies, and helped create a bibliographic archive for an exhibition. In a letter to Auricchio, Leon said that the internship provided her an authentic museum experience.

“I truly learned so much about art and got to discover so many new artists that I would have never known about otherwise,” she said. “I even found a whole new art movement to obsess over!”

As the program developed so too did social justice movements like Black Lives Matter, with protests taking place on the streets across the nation. Auricchio and Mast began to home in on institutions that incorporate racial justice as part of their programming. They partnered with Interfaith Center of New York for three internships, one of which focuses on racial justice issues. Another internship at Brooklyn Museum will host a student that will help prepare for the exhibition, “Andy Warhol: Revelations.” Auricchio credited the Office of the Chief Diversity Officer and Career Services and with helping identify and coordinate with partners.

Grappling with the Past at a Historic House

At the Dyckman Farmhouse, in the Inwood section of northern Manhattan, the historic house museum had been grappling with its past association with slavery for several years. This past spring, current rising junior Arden Wang’s virtual internship explored not just slavery, but contemporary social justice issues like food insecurity for the largely underserved community that lives near the museum. Wang is also a double major in English and new media and digital design. Her virtual internship focused on preparing monthly newsletters and helping develop social media strategies.

“I was helping with community engagement, but I was also learning about the history which was helpful for me as someone from New York who had no knowledge about the history of slavery in the city. It was eye-opening,” she said. “What emotionally stuck the most for me was the lack of acknowledgment of slavery in the neighborhood, but the museum is doing a lot of work to make people more aware of what used to be here.”

In a letter to the deans, Dyckman Farmhouse Alliance board chair Don Rice said the internship program has helped the museum serve its mission to “expand our reach within our community while helping students get hands-on experience.”

Students have told Auricchio that the internships have helped develop an understanding of how their studies can be applied in the real world, a synergy she had hoped for from the start. She said that nearly all of the internships are project-based and offer a solid educational experience tied to Fordham’s mission, not the least of which was helping the city get back on its feet again amidst the pandemic.

“Now, in fact, we feel the initiative actually helped the city come back, because we were contributing to the revitalization of New York—and I just know there’s going to be a renaissance after the plague,” she said.