skip to main content
Return to Fordham University
You are at:Home»Inside Fordham»National Security Adviser Delivers Last Lesson to Class of 2012 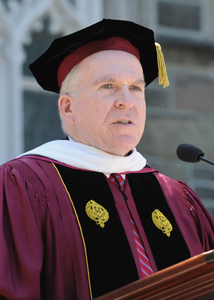 “Honesty, integrity, and fairness”—these are professional traits to cultivate throughout one’s life in good times and bad, said John Brennan, FCRH ’77, one of President Obama’s principal national security advisers, in an address to the Fordham University Class of 2012.

“Never judge your actions according to what those around you do. Judge yourself against the high standards you set for yourself,” he told an enthusiastic audience of more than 15,000 graduates and their guests gathered under blue skies on Edwards Parade, for the University’s 167th Commencement on May 19.

Along with Brennan, singer Tony Bennett, pediatric cardiologist Eugenie Doyle, MC ’43, and actress Phylicia Rashad received honorary degrees at the commencement ceremony. Timothy Cardinal Dolan, archbishop of New York, was the principal celebrant and homilist at Fordham College at Rose Hill’s Baccalaureate Mass on May 18, at which he received a doctorate of humane letters, honoris causa.

Throughout his address, Brennan recalled the influence of his Fordham professors, including the political science professor—John Entelis, Ph.D.—who first sparked his interest in exploring the world and told him about the opportunity to study at the American University of Cairo, which he seized.

See the full video of the ceremony here.

“As with most things in life, it was the influence of others—those who helped me learn here at Fordham—that left the most lasting and indelible imprint,” he said. “I had some truly remarkable professors and instructors—educators who knew that learning is a journey that doesn’t end with a semester’s close or even with the achievement of a degree. It is a journey that lasts a lifetime.”

He delivered his commencement address in front of the academic building—Keating Hall—where he first wrestled with some of the moral questions that continue to occupy his mind today.

“The textbooks I read and the papers I wrote in John Banja’s [philosophy]class have traveled and remained with me over the past 35 years,” said Brennan, who serves as assistant to the president for homeland security and counterterrorism and deputy national security advisor. “I have reread them many times as I have struggled with the real-world application of the concepts that I learned about as a 20-year-old.”

Brennan, who was deeply involved in the successful hunt for Osama Bin Laden, said among those real-world questions were: “What constitutes justice?” and “When is war a morally acceptable choice? What are the ethics of warfare?”

Brennan’s appearance stirred opposition among some students and faculty opposed to the Obama administration’s defense and homeland security policies. He acknowledged the controversy in his speech. “Much has been attributed to me over the course of my career,” he said. “And after recently reading some of the things that I reportedly have done, said, or have been responsible for while I was at the CIA and the White House, I must admit that I was deeply torn between giving the commencement address or joining the protesters and petitioners who have so energetically opposed my appearance.

“But that’s what makes our country great: our individual ability to openly and freely express our views, whether or not they are popular, whether or not they are in the minority, or whether they are even based on misimpressions.” Brennan had to pause here for sustained applause. “That’s why I still do my job, because the values that this country was founded on, to include freedom of speech and freedom from harm, are worth fighting for.

“And as long as I try to do my job to the best of my ability by calling upon the life lessons that I learned in Professor Entelis’ political science class, Father Rushmore’s theology class, and John Banja’s philosophy class, I can rest peacefully at night, and I do.”

In his own address, Joseph M. McShane, S.J., president of Fordham, noted that he and Brennan met that morning with faculty members, students, and members of the Board of Trustees to hear and respond to concerns that had been raised about Brennan’s selection as speaker.

“The discussions…were both good and very important,” Father McShane said. “They bore witness to the seriousness with which our faculty and our students wrestle with the great and sometimes divisive issues of our age.

“It is good for us to remember that our nation was founded as a self-conscious experiment in democratic government,” Father McShane said. “From the very birth of the republic, therefore, it was understood that we would never be, and could never be, a static society. Rather, it was believed that our national experiment would, and only could, grow stronger and more perfect through the honest and vigorous debate of deeply held views connected with our core values.

“Therefore, I would like to thank both [Brennan] and the women and men who raised questions about his appearance for making this an occasion on which our graduates were sent out into the world with an important lesson on civic engagement.”

He said Brennan, that morning, offered to come back to campus next academic year for a longer discussion. “I agreed on the spot,” Father McShane said.

He also urged the graduates to “be forever bothered” about problems in the world. “Seek answers that will bring a measure of justice to our world, and a measure of dignity to all the brothers and sisters that God has placed in our care.”

Brennan told the 3,432 graduate and undergraduate degree recipients that they were among the most privileged of the world’s population. “You have virtually limitless potential in your respective career fields, but it will remain only potential if you do not seize the opportunity you have been given,” he said.

In other advice to the graduates, he impressed upon them the need to work hard to prove themselves in the workforce. “There is no free lunch,” he said. “You will need to work hard and overcome obstacles, probably more times than you think you should.”

Brennan also stressed the need for work-life balance, and to spend time with one’s family. He said he was “blessed” to have his 92-year-old father, Owen Brennan, in the audience, and he urged the graduates to take his father’s advice. “Don’t look back years from now with regret because you didn’t get that balance right,” he said. “Believe me, the cost of such a mistake is too high.”