skip to main content
Return to Fordham University
You are at:Home»Editor's Picks»Making Connections at Opening Day

More than 2,000 new students converged on Fordham’s campuses on Aug. 30, greeted by maroon-clad upperclassmen and a host of University staff and administrators.

BELOW: See a photo gallery of Opening Day
After months of campus tours, acceptance letters, and preparing for the transition to college, the incoming Class of 2019 was finally able to greet the community they will spend the next four years with—though it was hardly the first time they were “meeting” each other.

“This year we really tried to push social media as a resource for incoming students and as a way for them to see what’s going on,” said orientation leader Elle Crane, a senior at Fordham College Rose Hill (who for three years in a row has donned Fordham ram horns to breathe extra school spirit into Opening Day events). 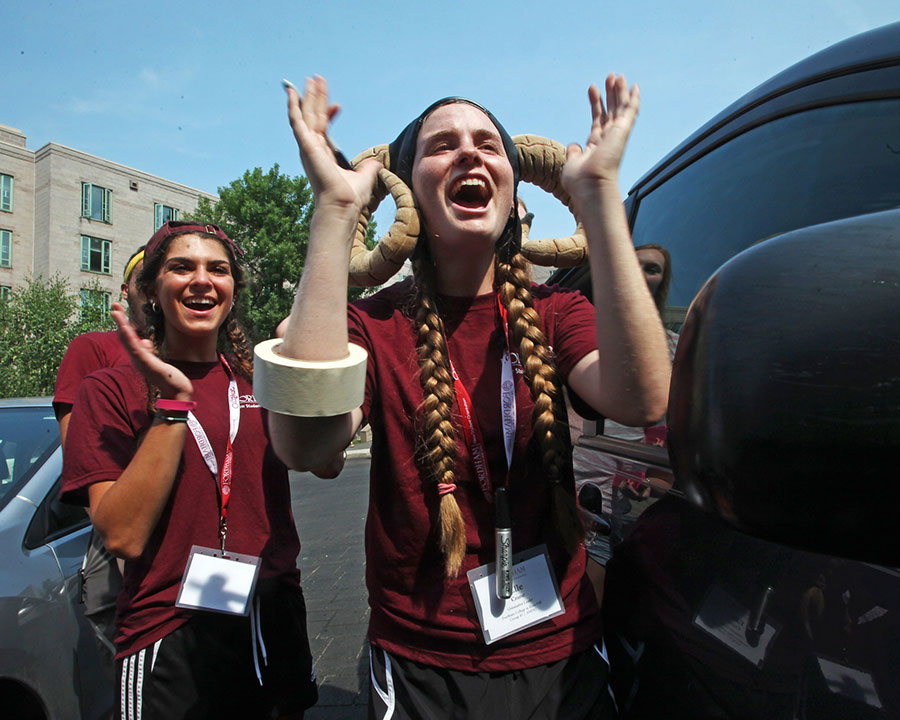 Each year during the freshmen move-in, FCRH senior Elle Crane dons the ram horns she caught at a Fordham basketball game her first year at Fordham.
Photo by Bruce Gilbert

“We created a series of hashtags on Instagram, which we used both on the main orientation account and on our personal accounts. That way, there was a thread of photos to show both what Fordham leaders and Fordham students are saying about orientation,” she said.

Connecting on campus and online

Phones flashed and shutters clicked as students and their families documented the milestone on Facebook, Instagram, and Twitter. Fordham alumni also chimed in, reminiscing on the threads about their own Opening Days. “Good luck to everyone!” wrote one alumna. “Remembering my days at FCRH, Class of 2006.”

Even President Joseph M. McShane, SJ, who was distributing water bottles in the parking lot to arriving families, paused to join the virtual conversation.

“Welcome to Fordham, the Jesuit university of the capital of the world!” Father McShane said via Snapchat. “We’ve been looking forward to the Class of 2019 all summer, and today is the day.”

Social media also had a practical upshot for the new freshmen. Many students used the various platforms to connect with their roommates and to divvy up supplies for their new living spaces.

“We followed the orientation Facebook pages and Instagram account, and also the Fordham Snapchat to connect to each other and to get information about orientation,” said freshman Kendall Perata, of San Jose, California.

The virtual bonds were mere precursors, however, for the real connections that awaited the freshmen.

“I was worried, being so far away from him—until we saw the school. After that, I had no reservations whatsoever,” said Kristen Tibbetts, of Pearl Harbor, Hawaii, whose son Nathan was moving into Loyola Hall.

“You get an immediate feeling walking onto campus that the people who work here care deeply about the students. I know he’s well looked-after here.” 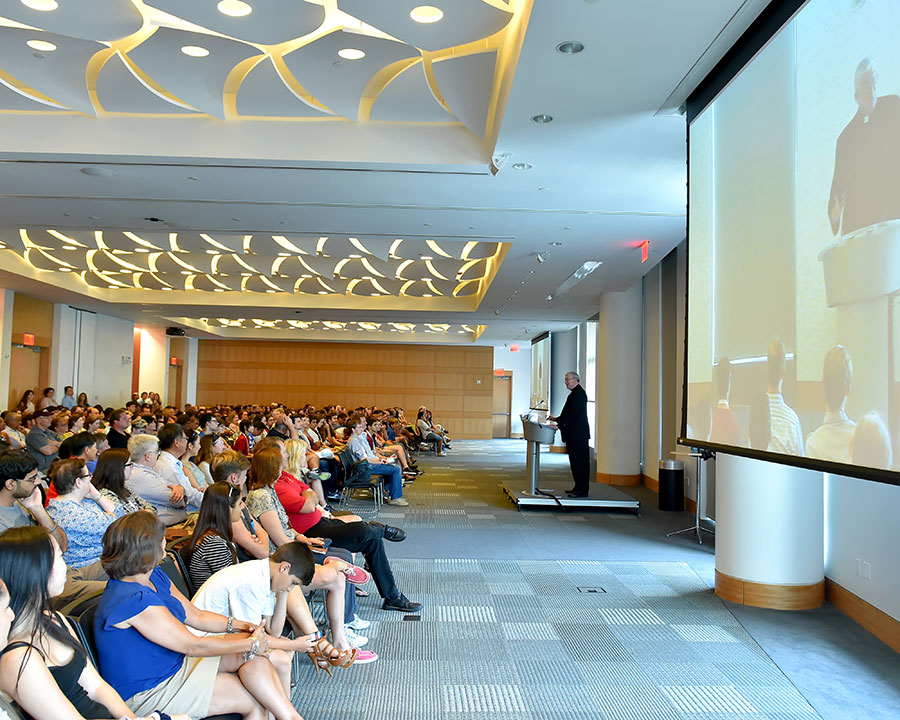 Lincoln Center campus Dean Robert Grimes, SJ, greets the Class of 2019: “Believe in yourselves. You can do it!”
Photo by Dana Maxson

At Lincoln Center, Sunday’s orientation activities included a Freshman Commuter Student welcome. Vincent Apicella, from the Bensonhurst section of Brooklyn, said the party on Robert Moses Plaza made him feel instantly connected to the school.

“I like this,” he said, sticking close, at first, to a group of school friends from Xavier High. “The first time I stepped on campus was January. It just felt right. It was that simple.” He said he hopes to spend not just four, but seven years at Fordham, tracking into its law school after finishing his undergraduate degree.

Apicella and his friends were eventually assimilated into one of nine commuter groups for a series of games on the grass led by upperclassmen mentors. More than half of the college’s students are commuters.

FCLC junior Daniel Villar’s first question to his group, he said, was “how was it getting here today?” All 20 of his students showed up, he said, which was “something to get excited about.”

“We are there for them,” said Villar, a psychology major who will mentor the students through their entire freshman year, taking them on group outings and offering individual guidance. “They can come to us with any questions—academic, social life, commuter problems, anything.”

Once a commuter student himself, Villar said it was helpful to have a mentor “especially when you have so many doubts about everything coming into college. You don’t know who to turn to.”

That camaraderie, said Crane, is what kept coming to mind while she worked her final Opening Day.

“I feel a bit nostalgic, because these freshmen are starting their first year as I’m starting my last,” she said. “It’s awesome to see their excitement in joining a community that I myself have felt so excited about.” 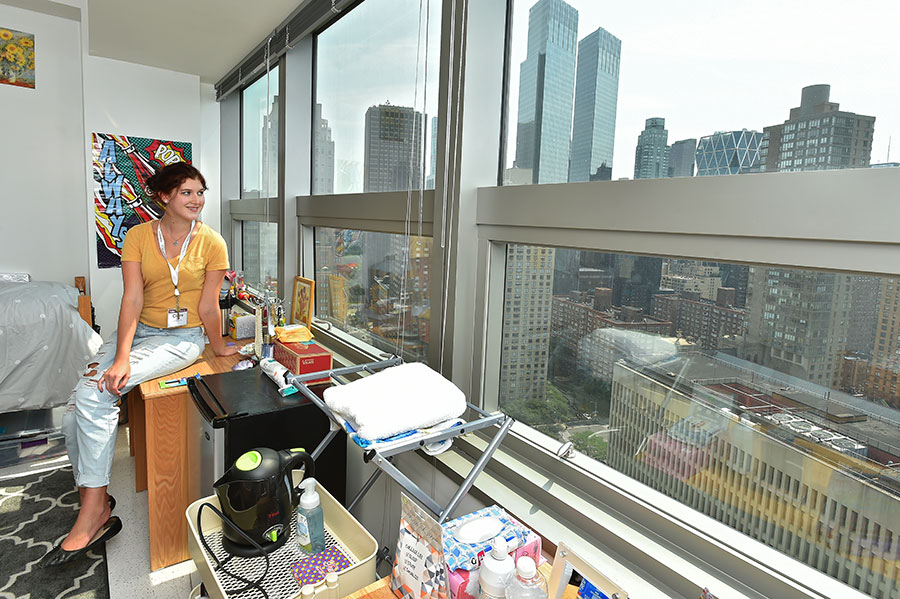 At Lincoln Center campus, volunteers boosted new students’ baggage from the cars onto the elevators leading to Fordham’s newest residence, the 22-story McKeon Hall. Claire Holmes, from Woodbridge, Virginia, was one of the luckier ones, drawing a top-floor dorm room with views of both the Hudson River and Central Park. “I was hoping for a good window,” said Holmes, who chose Fordham because she wanted to go to school in New York City. “And I got one.”
Photo by Dana Maxson

— Janet Sassi contributed to this report

One of the most distinctive features of the Class of 2019 is their stellar academic achievement, said John W. Buckley, associate vice president for undergraduate enrollment. The freshmen class has a mean test score of 1275 and a mean high school GPA of 3.64.

“It’s truly an extraordinary class from the standpoint of academic readiness,” Buckley said. Consequently, 215 students were accepted as presidential, dean’s, and merit scholars. Overall, 91 percent of the Class of 2019 was offered some sort of University financial aid.

In addition, the number of international students climbed to a total of 187 students hailing from 29 countries.