skip to main content
Return to Fordham University
You are at:Home»University News»LGBTQ Panel Discuss Intersection of Race, Religion, and Sexuality
Panelists Amina Wadud, Justin Lee, Cedric Harmon, and Jorge Aquino.
A Sept. 23 panel at Fordham brought together scholars, religious leaders, and activists from multiple faiths to discuss the importance of intersectional dialog among the topics of race, religion, and the LGBTQ community.

“Race often brings complexity to conversations; race combined with religion further complexifies the discussion; sexuality and gender adds yet another layer of complexity,” said the Rev. Cedric Harmon, co-director of Many Voices: A Black Movement for Gay and Transgender Justice, one of several attendees representing the Catholic, Protestant, Orthodox Christian, Mormon, Jewish, Muslim, and Hindu faiths.

Justin Lee, executive director of Gay Christian Network, pointed to a “tremendous amount of racism” that exists within the gay community, where men of color are “fetishized, stigmatized, or both,” he said.
“They’re often looked at as something to be ‘into,’ rather than someone in our community,” he said.

And yet many in the gay community fear expanding the conversation beyond gay issues, worrying that focusing on more than one issue might be at the expense of each individual issue.

“That is why this intersectional work matters,” he said.

While intellectual conversations like the ones taking place at the conference are important, the LGBTQ community must also reach across the divide in language that is familiar to congregations everywhere, which could best be achieved through personal stories, said Lee.

Most of the familiar stories, however, about are about cisgendered gay white men he said—a statement that led one audience member to remind the attendees that even though the Stonewall riots that brought about the modern gay rights movement was ignited primarily by transgendered men and women of color, white male participants often get most of the credit.

“We also have to look at those whose stories are not being heard,” said Lee.

Amina Wadud, Ph.D., an adjunct professor at the Starr King School for the Ministry, provided a Muslim perspective. She warned that any intersectional approach should be wary of imposing “Western liberal ideals” that, for example, “seek to save women from the burka.”

She said that many in the Muslim world are skeptical of Western values and don’t necessarily ascribe to identity politics.

“The queer movement in the West is still very much an individualistic movement,” said Wadud, citing coming out as an example. She noted the importance of family community in Muslim culture. “For some, staying in the village is so much more important to their identity, survival, and their sense of self.”

Harmon spoke of a recent visit to Liberia, a nation where the discussion of sexuality rarely happens but is much needed. He noted that when it does happen, euphemisms are often used. Sex is often referred to as “man and women’s business.” 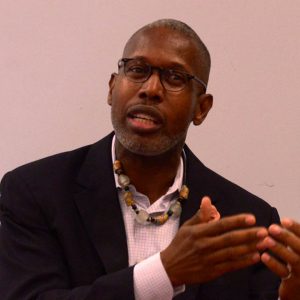 Cedric Harmon wears the beads he received in Liberia.

Harmon said he negotiated a way to discuss sexuality with the Liberians and made progress. When he left, his hosts told him, “It’s not just man and women’s business; It’s everybody’s business.”

As he relayed the story, Harmon donned beads that he received there. Later, he talked about how he was perceived when he wore the necklace in Washington, D.C., where he lives.

“The reaction is, ‘Is he queer or is he African?’ If I wear it when I’m preaching, the reaction is even more interesting,” he said. “I feel a connection to the beads as a symbol of the queerness that shows up and the ways that people try figure out how to interact with that.”

He compared the choice to wear the beads to decisions every LGBTQ person makes when they get dressed in the morning.

“There’s an interplay and that’s that choice of ‘What will I experience when I walk out that door today?’ Because there are those who will want you to bring queer part, but not that black part or the religious part,” he said. “But those are the moments when we have state very clearly, ‘I bring all of me into this room.’”