skip to main content
Return to Fordham University
You are at:Home»University News»In Expanded Campus Center, ‘A New Sense of Community’
Students working, playing, and relaxing in the new building addition at the Rose Hill campus center. Photo by Bruce Gilbert
Since Fordham University’s new campus center partially opened to students at the start of February, it has begun to serve as the kind of warm, welcoming home for students that it was meant to be—even as construction continues on the multiyear project.

On a recent day in early March, construction crews were kicking off the second phase of the campus center renewal by starting to demolish the former entrance to the McGinley Center, the student hub that opened in 1959. Meanwhile, nearby, in a new four-story addition to that same McGinley Center, students were congregating in the student lounge—catching up, shooting pool, typing on their computers—and soaking in the soothing ambience. 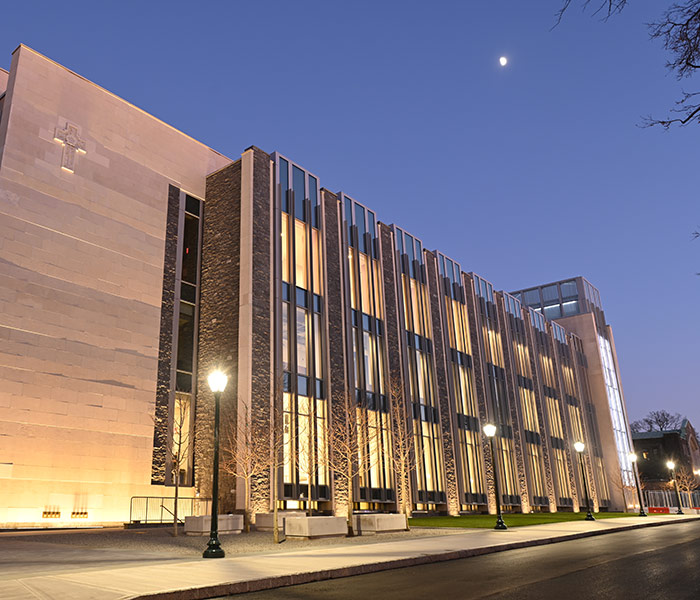 “It’s relaxing. I enjoy being here,” said Thomas Aiello, a junior who was getting some work done on his laptop. A student seated nearby, Kayla Bonitto, appreciated having the new gathering space after the physical isolation of taking virtual classes during the height of the pandemic. She and her friends had made plans to explore the new building together; on a recent night, students had gathered in the lounge for the State of the Union address and updates on the crisis in Ukraine. “It’s like a new sense of community,” she said.

That was the idea behind the campus center renewal, a keystone of the University’s $350 million fundraising campaign, Cura Personalis | For Every Fordham Student, which seeks to enhance all aspects of the student experience.

The new building addition will be combined with the Rose Hill Gym, Lombardi Center, and a renovated McGinley Center to form a larger complex that provides the entire University community with vastly greater space for offices, events, dining, fitness, and forming personal connections.

For some who have given in support of the project, it represents not just bricks and mortar but rather the continuous work of serving students and advancing the University from one era to the next.

Forging Ahead, Past the Pandemic

Kim B. Bepler, a Fordham trustee fellow and longtime University benefactor, recalled coming to campus for a lunch meeting during the first year of the pandemic, when the pivot to virtual learning had left the common areas of campus empty and quiet—except for the noise made by the builders. 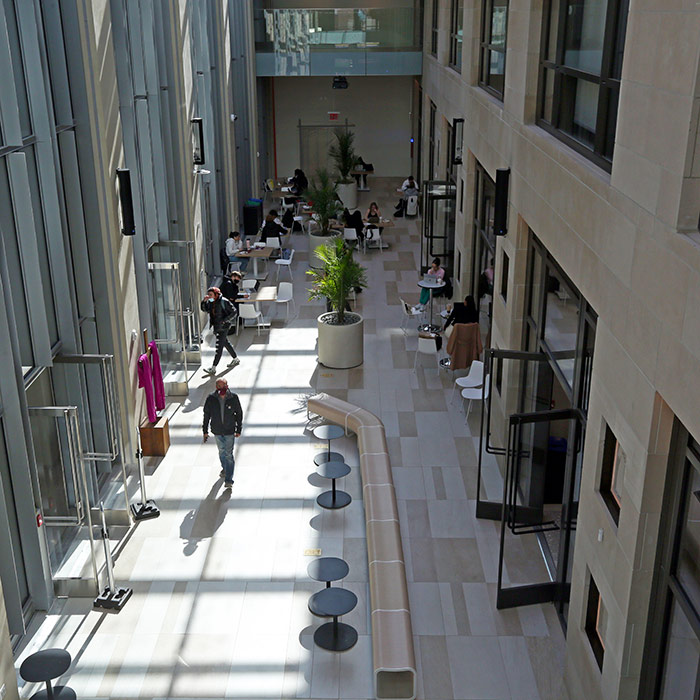 The gallery between the new building addition and the McGinley Center. Photo by Bruce Gilbert

“It was rather poignant to be there when no one else was” and hear the project proceeding, she said. “At that moment, when we were all frightened, when we had no idea what was going on and when this was ever going to be over, that indicated to me that things would move on, life would continue somehow, some way,” she said.

She and her late husband, Steve Bepler, FCRH ’64, who passed away in 2016, have funded a wide array of needs at the University, including four endowed chairs in the STEM fields. It was appealing to support this project because the campus center will be named for Fordham’s president, Joseph M. McShane, S.J., and also because of its importance for fostering the informal exchange of ideas beyond the classroom, she said.

The project was important to Steve because of his own experience of student life at the University—“He loved his Fordham education,” she said.

“I just found that very encouraging and very heartwarming to be there during the pandemic and to listen to the sounds of construction and the sounds of the future,” she said.

‘Part of Being a Great University’

Trustee Emeritus Robert E. Campbell, GABELLI ’55, went to Fordham at a much different time, when the business school was housed in a surplus Army barracks building on the Rose Hill campus. “Many days, we would sit through class with our overcoats on,” he said. The McGinley Center wasn’t yet built, and because he was commuting from northern New Jersey, his mingling on campus was limited.

Even so, the social experience has stayed with him. “It put me in touch with so many new people,” he said. The Rose Hill campus “always was a place where wonderful people congregated.”

The renewed and expanded campus center will be dedicated in honor of Joseph M. McShane, S.J., president of Fordham, in a ceremony at the Rose Hill campus on April 27. Members of the University community may register here and post a tribute to Father McShane.
He went on to contribute to the physical transformation of the campus—as chair of the Board of Trustees from 1992 to 1998, he played a leadership role in the construction of the William D. Walsh Family Library, which opened in 1997. He and his wife, Joan M. Campbell, are generous University donors who were among those honored with the naming of the residence hall complex—comprising Campbell Hall and Salice and Conley Hall—that opened at Rose Hill in 2009.

Now, they are giving in support of the campus center renovation and expansion.

“I don’t look at it as necessarily just a physical structure,” Campbell said. “It’s a home for people. People come to Fordham and leave their own homes [and]take up residence at a place. My feeling has always been that you would like to make that, physically, as supportive as possible.”

He noted that students’ experience of the new campus center could encourage them to give back to the University down the line.

“You always have to keep investing. It’s just part of being a great university, which Fordham is,” he said.

The new campus center offers state-of-the-art fitness equipment; glass walls and ceilings that allow for natural light; bigger and better spaces for the Career Center, Campus Ministry, and Center for Community Engaged Learning; new multipurpose rooms; and many other amenities. 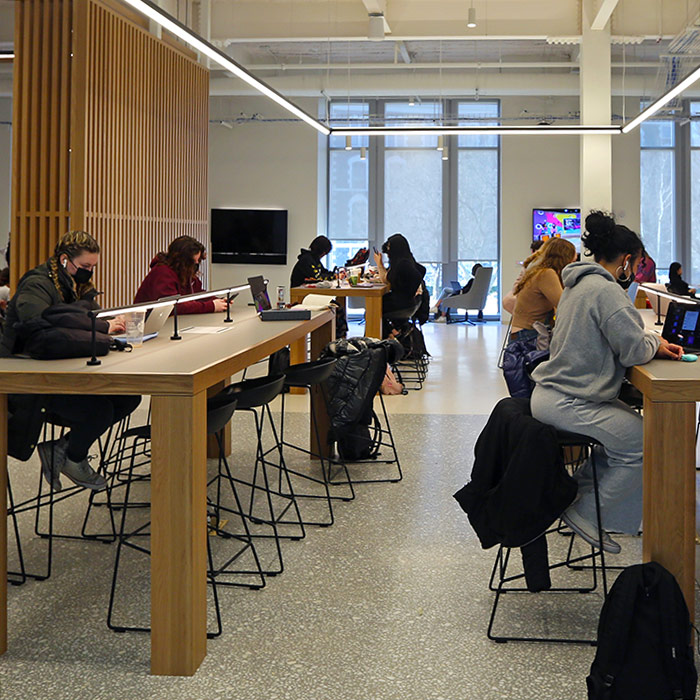 The student lounge in the new building addition. Photo by Bruce Gilbert

And more is yet to come—the phase-two demolition of the current McGinley Center entrance is clearing the way for an enclosed glass arcade from which students can access the Rose Hill Gym, the McGinley Center, the Lombardi Center, and the new building. That’s expected to be done by September 2023, said John Spaccarelli, director of facilities and special projects, who is overseeing the construction.

Phase three, to be done by the end of 2024, involves renovating the McGinley Center and reconfiguring some of its existing spaces, Spaccarelli said. He estimated that the entire campus center renewal is 35% to 40% complete.

In the student lounge, first-year student Jocelyn De Fex appreciated having the kind of inviting communal space that commuters like herself would otherwise have a hard time finding on campus. “If this didn’t exist, I would only be able to go to the library,” she said. She was hanging out and eating breakfast in the lounge with Kayla Bonitto, who appreciated the layout that makes the Career Center easier to find.

“When you get off the [second floor]elevator, it’s immediately right there,” said Bonitto, a junior.

A Place for Focusing

Nearby, Nick Chao, also a junior, said the lounge seemed to invite studying. “You kind of feel like when you come here, you can get work done,” he said. “I come here maybe a few times a week, maybe late at night, just to get some studying in.”

Conversation formed a gentle background hum. The 17-foot-high ceilings were treated with an acoustical spray that not only protects against fire but also dampens the sounds that would normally be bouncing around between the walls and the ceiling, Spaccarelli said.

Aiello, an organizer with the Herd, a student group supporting Fordham athletics, said the aesthetic appeal of the center will surely help with recruiting prospective students as well as student-athletes. The project shows Fordham’s commitment to updating its infrastructure, and “I think that’s huge for [the University],” he said.

To inquire about giving in support of the campus center renewal or another area of the University, please contact Michael Boyd, senior associate vice president for development and university relations, at 212-636-6525 or [email protected]. Learn more about Cura Personalis | For Every Fordham Student, our campaign to reinvest in every aspect of the Fordham student experience.