skip to main content
Return to Fordham University
You are at:Home»University News»Frank Puppola, Watch Engineer and Dependable Jokester, Dies at 70
Frank Puppola in a photo taken last Christmas (Photos courtesy of the Puppola family)
Francis “Frank” Puppola, a watch engineer at Fordham’s Lincoln Center campus who was known for his deadpan sense of humor and the care he showed his coworkers and family, died suddenly on the job on Oct. 28. The cause was a heart attack, according to the family. He was 70 years old.

By all accounts, Puppola was in good spirits as usual when he started his eight-hour shift, having spoken to a colleague by phone just a few hours before he died. Paramedics were called when he was found, but he was pronounced dead on the scene.

“Frank was a genial and always helpful presence at the Lincoln Center campus. He took a special interest in helping the younger engineers and staff in Facilities Operations, and went out of his way to ensure that the students, faculty, and staff on campus had comfortable quarters to teach, learn, live, and play,” said Joseph M. McShane, S.J., president of Fordham.

Puppola started at Lincoln Center in February 2004 after taking a buyout from AT&T, where he worked for two decades. He eventually rose to become the most senior engineer in his department at Fordham and developed a reputation for looking out for his coworkers, said John McDonagh, director of facilities operation at Lincoln Center.

“He was always generous with his time and dedicated to the job, very caring about the all the other guys, especially the younger guys; when they had children, he’d be the first one with a gift,” McDonagh said. “And he cared for the University; he always made sure the lights were on and that the kids living in the dorms were comfortable. He really felt for the kids.” 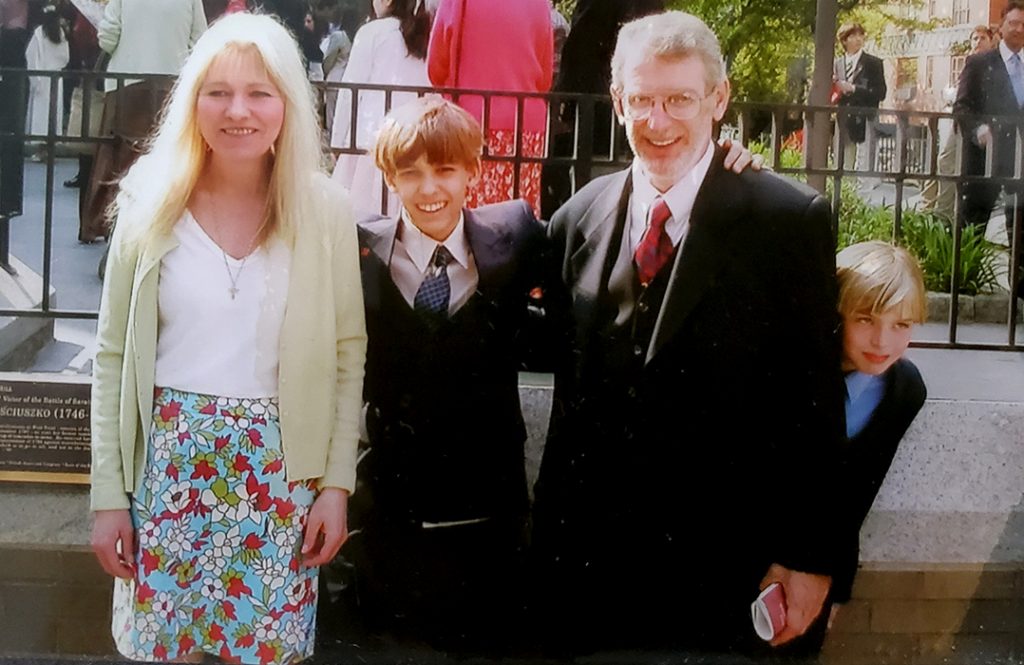 Frank and Lizabeth with their sons Peter, center, and Philip, in 1998.

Puppola was born and raised in Queens. He served as a private first class in the Air Force during the Vietnam War. Stationed in Thailand from 1969 to 1972, he loaded bombs onto airplanes. It was a task that would trouble him for the rest of his life, said his wife, Lizabeth Puppola, Ph.D., GSS ’17.

Lizabeth and Frank attended Queens College at the same time, but they would not meet until they worked together at AT&T. At the time, Lizabeth was involved in a long-distance relationship. Frank asked her out and they dated a bit before he proposed and asked her to move into his two-bedroom apartment in Queens. But she insisted they live in Chelsea, where she was born and raised.

At the time Frank, who had a lifelong love of cars, owned a little red Triumph.

“We had to get together money for the wedding.,” Lizabeth said. “He sold his Triumph so we could get married, and he loved that car,” she said.

Frank moved into Lizabeth’s one-bedroom in Chelsea, and later the couple moved up, literally, to a large 40th-floor apartment with a terrace in the same apartment complex. By that time, they had two children, Peter and Phillip. Lizabeth said Frank created a garden that served as a barrier so the boys wouldn’t be able to slip between the balcony bars.

“He made it look like a garden with a white picket fence and flowers and trees made out of wood. He even made a buzzing bee attached to a twisted wire,” she said.

The family lived within walking distance of the Lincoln Center campus. When Lizabeth began to pursue her Ph.D. at the Graduate School of Social Service the two would run into each other in the cafeteria.

“A lot of guys would have said, ‘What do you want the Ph.D. for? You already have a job,’” said Lizabeth, who is now a psychotherapist. “He used to joke, ‘Part of that Ph.D. is mine.’ And it was. I could only type with one finger and he knew how to type, so he said, ‘Let me type it for you.’ That was a lot of typing. When I graduated, he framed my diploma.”

Puppola’s proximity to campus meant that he could be one of the first on the scene during an emergency, which he was during Hurricane Sandy and many a blizzard, said McDonagh.

But it’s the corny jokes that most of his colleagues will likely remember most, said McDonagh, who more than once was pulled into a seemingly serious conversation before realizing that Puppola had snared him once again.

“It’s the way he delivered them; you’d walk in and he’d say, ‘Did you hear about this?’ You’d stop, ‘cause he led you into it and before you know it you’re like, ‘You freakin’ got me!’”

Watch engineer Patrick Howe was another of Puppola’s targets.

“Every week. They always started out as, ‘I got a new one for you,’” said Howe, recalling that the jokes were often bawdy but never vulgar. “They were like, ‘How do you tickle a rich girl? Gucci, Gucci, Gucci.’ They weren’t memorable, they were terrible, but we all liked them, because he liked to tell them.”

Howe said that Puppola’s reliability anchored the team—whether it be his humor, his willingness to fill in for colleagues, or his all-around dedication.

“The truth is he didn’t have a mean bone in his body, you couldn’t say anything bad about him,” said Howe.

Puppola and his family had a weekend place in Pennsylvania. Colleagues said he had filed for his retirement paperwork the week before he passed. Lizabeth noted that he had COVID-19 back in March, and that the medical examiner thought that it may have contributed to his heart attack.

Lizabeth, who is a practicing Catholic, said that Frank was agnostic, but she added that her husband “embodied Christianity.”

“He swore to the priest he would raise our boys Catholic, and he did that for me. If he saw a woman struggling with packages, he’d say to our boys, ‘What would Jesus do?’ and they’d go over and help her out. Everyone always complimented us on them,” said Lizabeth. “He would help anyone who asked him, and help them anytime or anywhere. He did so much for us.”