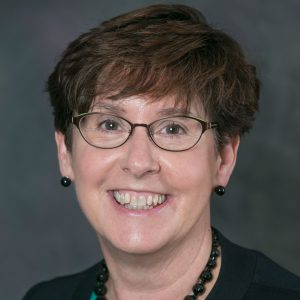 Elaine M. Crosson, JD, was named as Fordham University’s new general counsel, as of August 31, 2015. She follows Thomas E. DeJulio in the position, who is retiring from Fordham after more than 42 years of service.

Crosson comes to Fordham from Stony Brook University, where she was the vice president for government and community affairs. An experienced attorney, she previously served as Long Island University’s general counsel, and has extensive background in government affairs and the judiciary.

“I am very pleased that Ms. Crosson has accepted our offer, and I know the Fordham family joins me in welcoming her to the University,” said Joseph M. McShane, SJ, president of Fordham. “I believe her experience, talent, and ability to reach consensus on thorny issues will serve us well in the years to come.”

At Stony Brook she provided strategic guidance to the president, the governing boards, and senior administrators on legislative, appropriation, regulatory, and community issues, managed a successful statewide campaign to enact legislation regulating tuition increases for public colleges and universities in New York, and secured more than $200 million in capital funding to support the university’s strategic goals.

Prior to her tenure at Stony Brook, Crosson was general counsel and vice president for legal affairs at Long Island University, where she successfully settled tax matters and environmental claims, and negotiated the sale of an 82-acre campus. She also launched an initiative to ensure compliance with over 200 statutes, including the Higher Education Opportunity Act, FERPA, and the Clery Act. She previously served as LIU’s deputy general counsel, and as the university’s director of government relations.

Earlier in her career, Crosson was a family court hearing examiner in Suffolk County. In that role she heard cases involving child support and spousal support. She has also served as general counsel for the Interest on Lawyer Account Fund, and as an associate at Whiteman Osterman & Hanna, in Albany, where she represented major corporations, not-for-profit institutions, and trade associations before the New York State Legislature. She was also the principal law clerk of Associate Judge Joseph W. Bellacosa of the New York Court of Appeals, in Albany.

Crosson received her bachelor’s degree from St. John’s University, and her juris doctor from Albany Law School. She is a member of the New York State Bar. She lives in Huntington, Long Island, with her son, Daniel.