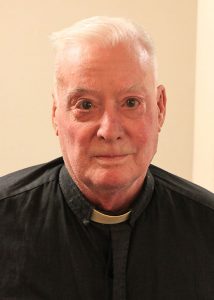 Richard J. Regan, S.J., a member of Fordham’s department of political science for 44 years, died on Feb. 21 at Montefiore Hospital at the age of 89.

Born in Morgantown, N.J., in 1930, Father Regan attended Jersey City’s St. Peter’s Prep and St. Peter’s College, where he graduated in 1948. Upon graduation, he studied for a year at Harvard University Law School. He entered into the Society of Jesus in August 1953 at St. Andrew-on-Hudson novitiate.

After completing his novitiate, he earned a degree in philosophy at Loyola Seminary in Shrub Oak, New York. He taught logic and metaphysics from 1957 to 1960 at St. Peter’s University and followed with four years of theology studies at Woodstock College in Maryland. He was ordained to the priesthood at University Church on Fordham’s Rose Hill campus on June 20, 1963. He completed his final year of study, or tertianship, at the Institute of St. Robert Bellarmine in Wépion, Belgium, in 1965 and two years later, earned a doctorate in political science at the University of Chicago.

He joined Fordham’s political science faculty in 1968, and would stay for 44 years. In addition to introductory courses on politics, he taught elective courses centered on constitutional law.

“Father Regan was a distinguished scholar of constitutional law, but equally important to his identity was his love of running and the daily long runs he completed around the Bronx botanical garden, said John Entelis, Ph.D., a professor of political science and former chair of the department.

“As a fellow runner, he and I would share the exalting experience of being outdoors, running long distances when often he would ponder the ideas for his next book. He was the embodiment of a vibrant mind fueled by a runner’s high that he maintained until he literally could no longer walk.”

In addition to serving as editor of Law and Justice: The Christian Law Review, from 1985 to 1990, Regan was a prolific writer who continued to explore the intersections of law, politics, philosophy, and religion after he stepped away from teaching duties in 2012.

In his retirement, Father Regan lived at Murray-Weigel Hall, an assisted-living facility for Jesuits near Fordham’s Rose Hill campus.

Father Regan devoted a great deal of scholarship to the works of Saint Thomas Aquinas, in books such as Aquinas: A Summary of Philosophy (Hackett, 2003), Aquinas: The Cardinal Virtues, (Hackett, 2005) , and Aquinas: Commentary on Aristotle’s Poetics (Hackett, 2017), which he edited.

He also penned works such as American Pluralism and the Catholic Conscience; Private Conscience and Public Law (Macmillan, 1993) and The Moral Dimensions of Politics (Oxford University Press, 1986).

Catholic University of America Press Director Trevor Lipscombe, Ph.D., said he was always touched that Father Regan would end their correspondence with a script “R,” as shorthand for the Latin word for king or queen.

“I am English, and so he thought I’d like it, as the kings and queens of England end their signatures with a script R for rex or regina,” he said.

“He would call the press often, mostly when there was some late-breaking news about the British royals that he wanted either to ask my opinion about, or share his own. The same, too, for Brexit. A Thomist who read the tabloids!” he said, referring to the school of thought revolving around Saint Thomas Aquinas.

“He invariably asked about my daughter with cystic fibrosis and—the very essence of Father Regan—he would let me know when he found something in the news about potential new treatments. Everyone who worked with him at the press had a soft spot for Father Regan, and there was much sadness when we learned of his passing. He was a phenomenal scholar, someone who loved learning, but he remained, to his core, a caring priest.”