skip to main content
Return to Fordham University
You are at:Home»University News»Fordham Mourns Beloved Adjunct Professor Who Taught for 59 Years 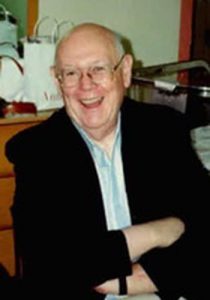 Fordham University mourns the passing of Frank G. M. Corbin, FCRH ’50, of Pelham, New York, a public relations professional and adjunct professor who was a beloved mainstay of Fordham’s communications faculty for 59 years. He died on Oct. 17 at the age of 90.

“We’ve lost someone who was very near and dear to the department, and to Fordham,” said Lance Strate, PhD, one of many professors in the Department of Communication and Media Studies who knew him. “He was a consummate professional in public relations and as a teacher. He was really a very kind and considerate person who was always interested in finding the common ground with the person he was interacting with.”

Corbin, owner of Corbin Communications Counsel in Pelham, was a 1943 graduate of Cardinal Hayes High School and a veteran of World War II and the Battle of the Bulge. He also belonged to the group of Fordham alumni that honored their former professor, Edward A. Walsh, by creating a scholarship and a media laboratory—located on the Rose Hill campus—in his name, Strate said. Corbin sat on the committee that chose the Walsh Scholarship recipients.

“He never wavered in his loyalty to Fordham and never stopped giving back for as long as he was able to,” Strate said.

While his career was successful, teaching at Fordham was “his true passion,” according to Corbin’s obituary. For decades, ending in 2012, he taught a popular course in public relations that he was clearly proud of, colleagues said. “I don’t think I’ve ever known a human being who loved teaching as much as Frank Corbin,” said communications professor Paul Levinson, PhD. “He loved being part of the academic world, and he loved being part of Fordham.”

Corbin emphasized ethics in the course, said another colleague, communications professor Robin Andersen, PhD. He was a longtime reader of The Catholic Worker who embraced Fordham’s ethos of social justice, as well as its philosophy of cura personalis, which was invoked at his funeral on Oct. 20, she said.

“His strength was unwavering, his intellect was rigorous, and his selfless nature was to be admired,” his obituary said. “He was well loved, respected, and will be missed by all who knew him.”

Corbin is survived by his two children, Catherine and Peter; his daughter-in-law, Annette; and his two grandchildren, Kaitlyn and Caroline.