skip to main content
Return to Fordham University
You are at:Home»University News»Fordham Makes Grand Return to St. Patrick’s Day Parade
Photos by Chris Taggart. Video by Taylor Ha and Tom Stoelker
The skies may have been gray, but smiles were bright at the St. Patrick’s Day Parade on March 17, where more than 300 Fordham alumni, faculty, staff, students, and friends marched for the first time since 2019. This year marks the parade’s return to Fifth Avenue after a two-year interruption due to the COVID-19 pandemic.

For many attendees, it was a chance to see New York City come back to life after two years of social distancing and separation. Meghan McAlary, a senior at the Gabelli School of Business, who serves as the president of Fordham’s Gaelic Society, said she was grateful to participate in the parade after going through the pandemic.

“We’ve definitely had a lot of pent-up energy to get out here, so it’s nice to finally be able to get together,” she said.

McAlary was marching with her father, John, who said that he was thrilled to see his daughter so involved with both the Fordham community and her Irish roots.

“We got to travel together to Ireland before the pandemic, so just to see her out here as the president of the Gaelic Society—I couldn’t be prouder. I grew up in New York City and I used to come down to the parade every year as a child, and to see her continuing that tradition is just wonderful,” he said. 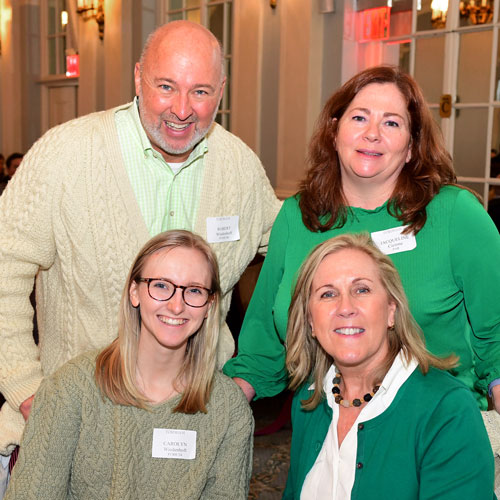 Eight decades’ worth of Fordham Rams participated in the parade, spanning graduates from the 1950s to current students. All nine of the University’s colleges, as well as Marymount, were represented, according to Michael Griffin, associate vice president for alumni relations.

Two of those generations were represented by the Wiedenhoft family, as Fordham College at Rose Hill sophomore Carolyn Wiedenhoft marched in the parade with her dad Robert, FCRH ’86.

“Seeing her love it and being able to share that with her is a great connection,” he said.

Catherine Trapani, a 2013 graduate of the Graduate School of Arts and Sciences and a member of the Fordham University Alumni Association advisory board, brought her daughter and best friend to the parade to participate for the first time. Trapani said that she wasn’t sure how the turnout would be with the weather and pandemic-related hesitations.

“It’s nice to see it filled with all different ages and schools,” she said.

Across the region, other traditions returned this year. In White Plains, James J. Houlihan, GABELLI ’74, served as the grand marshal of their St. Patrick’s Day parade to honor him for helping to establish the Great Hunger Memorial, among other volunteer and philanthropic works in and beyond Westchester County.

James T. Callahan, general president of the International Union of Operating Engineers, served as the New York City parade’s grand marshal. The parade featured a moment of silence for victims of the COVID-19 pandemic as well as in memory of the 20th anniversary of the Sept. 11, 2001 attacks and the war in Ukraine. The Fordham contingent stopped at St. Patrick’s Cathedral on its way up Fifth Avenue and tipped their caps to the church. 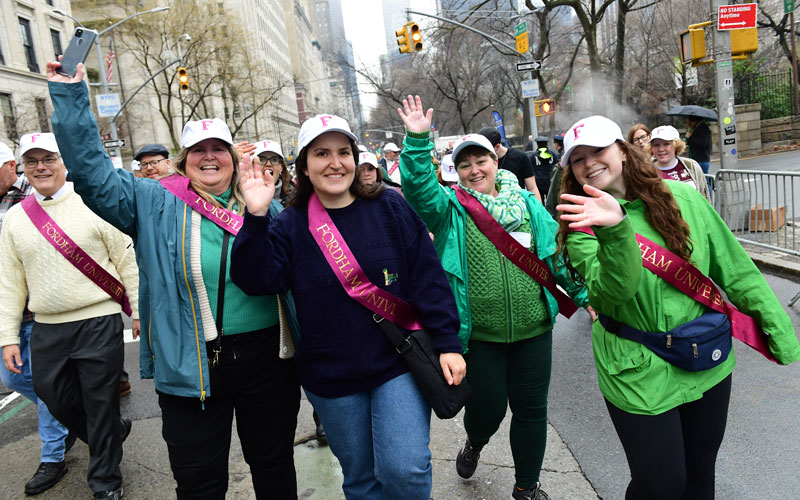 This year’s parade marks the last time that Joseph M. McShane S.J., president of Fordham, addressed the delegation, as he will be stepping down in June. For many alumni, saying goodbye to him was part of the reason they decided to march.

“He’s the most inspirational human being I know. I’ve known him for 20 years now and I’m just so happy for what he’s done for Fordham. And I wanted him to see as many Rams here, recognizing how we feel about him.”

At ‘Every Moment in Fordham’s History,’ Becoming People for Others

Before the parade, more than 200 participants gathered for brunch at the Yale Club. Father McShane served as the keynote speaker, and was met with a standing ovation from those in attendance. He called on the crowd to remember not only the story of St. Patrick, but also the story of another Irishman, Fordham’s founder Archbishop John Hughes— “a latter-day St. Patrick.”

Father McShane said that Hughes did four vital things for the city: purchasing land where the new St. Patrick’s Cathedral was built on Fifth Avenue; making sure there were Catholic schools for children to attend at their parishes; starting St. John’s College, which would become Fordham University; and helping to start Emigrant Savings Bank, which provided banking services to previously underserved Irish customers when it first opened.

“All of them really were aimed at one thing—taking care of the downcast, the downtrodden, the forgotten, the marginalized—us,” Father McShane said. “And Fordham has kept faithful to that mission.”

Father McShane said that “at every moment in Fordham’s history, Fordham is drawn to helping young men and women who have “great hearts and exceptional intellectual ability” find their way in the world and become people for others.

“This is what we’ve done for generations we’re able to do it now because of you—your kindness, your goodness, your generosity,” he said. 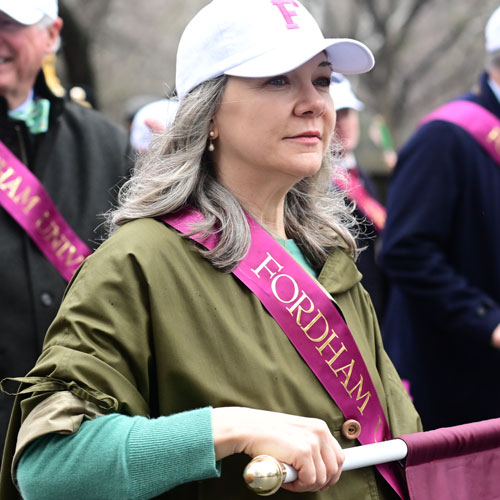 Sally Benner, chair of the FUAA

Those in attendance said that they were grateful for Father McShane continuing that mission throughout his tenure, particularly during the last few years.

“I feel like this St. Patrick’s Day, this parade is marking the point of [getting]  back to normal—it’s a brand new day, and it’s also being led by Father McShane,” said Sally Benner, FCRH ’84, chair of the Fordham University Alumni Association’s (FUAA) Advisory Board.

“We didn’t lose him and his leadership during the pandemic—he led us to the finish line and now we’re safe, we’re going to be OK.”