skip to main content
Return to Fordham University
You are at:Home»Inside Fordham»Lectures and Events»FBI Wants More Women in Cybersecurity
Panelists who work in cybersecurity spoke to students about opportunities for women and minorities in the field. Photos by Tom Stoelker
“I look around in my computer science classes and I’ve counted there are 30 students and five of them are female,” said Rose Hill senior Vanessa Gutierrez. 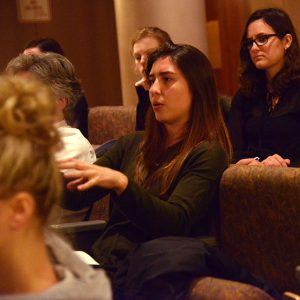 Gutierrez made the remarks at the Women in Cybersecurity Career Summit on April 16, which was sponsored by the Federal Bureau of Investigation, the Fordham Center for Cybersecurity, the Computer Science Society and Fintech Network.

Her sentiments highlighted the reason several women from the FBI’s Cyber Branch and from the private sector came to the Rose Hill campus to encourage young women to join their ranks.

Special Agent Kelly Cunningham, FCRH ’14, said that she would never have found her computer science talents had it not been for a fellow classmate showing her how to code.

“He was in the computer science program and he just showed me how to code one day and I was like, ‘This is awesome,’ but before then I had never heard of this or seen it before,” she said.

She said that the only computer science class she had in high school was keyboarding. Lena Loewenstine, a federal contractor who works with the Cyber Branch of the FBI in New York, said she had a similar experience.

“It never even crossed my mind when I was in high school and college to think about the possibility of a computer science degree or engineering. I loved math, it would have been a perfect fit,” she said.

“It wasn’t until I was on the job when I was learning about it and picking up the skills that I ended up in the career I love.”

Both agreed that there should be a push for young women in middle and high schools to be exposed to computer programming and STEM fields more generally. Several on the panel and in the audience gave a shout out to Girls Who Code, a nonprofit that exposes middle school students to computer coding.

And there are plenty of jobs out there for women who code, said Richard T. Jacobs, assistant special agent in charge at the FBI’s Cyber Branch in New York.

“The era of being a white male dominated agency is long gone,” said Jacobs. “There are clear reasons why we can’t be: We need to be representative of the population.”

Cohen said that only 11 percent of positions in the cybersecurity field filled by women, and that both the government and private sectors are making a big push to fill open positions with women and minorities.

“We are fully aware of what the benefits of diversity are, whether it’s women or minorities, there’s different perspectives and backgrounds to gain,” he said, noting that women who speak Arabic, Chinese, or Russian would be important hires for the department.

“We’re either doing something wrong in the recruitment phase or there’s something—some misperception or otherwise—that women don’t like the field, but we are making a tremendous effort to fix that,” he said.

For her part, Loewenstine said the government sector has been a very good fit for her.

“I can tell you from personal experience, I worked in three different government agencies now, and the ‘bro’ culture you hear about in Silicon Valley, well I’ve never experienced it,” she said. “In the government, there’s not that same mentality.”

Madeline Lobosco, intelligence analyst in the Cyber Branch of the FBI, said she had always thought of herself as an academic stereotype, leaning toward English, history, and foreign languages.

“One of my great regrets as an undergrad was not taking advantage of all the opportunities to float around and explore all the different resources you have,” said Lobosco.

She encouraged students to branch out beyond their comfort zone and study math and science, as well as the liberal arts.

“I wish that young girls could see more people like us,” she said.