skip to main content
Return to Fordham University
You are at:Home»Inside Fordham»FCLC Alumna Explains How Online Gaming Will Help Save The World 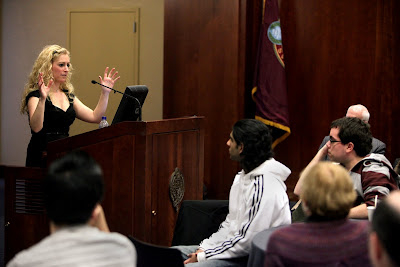 Online gaming is a multibillion-dollar business, trailing only the film industry in popularity and financial might.

But according to Jane McGonigal, Ph.D., FCLC ’99, the industry and gamers themselves have the potential to do something even Hollywood cannot. They can help solve some of the world’s most challenging problems.

“Gaming can help you make yourself better and help change the world,” McGonigal said on Feb. 2, during the inaugural lecture in Fordham College at Lincoln Center’s Industry Leadership Series. “I want to make it as easy to save the world in real life as it is to save the world in online games.”

For McGonigal, a member of O Magazine’s 2010 Power List, this is hardly idle chatter.

More recently, she created EVOKE, a 10-week online game that encouraged players to become social entrepreneurs. She said people from 130 countries participated in the game (which she created with support from the World Bank) and ultimately started more than 50 companies to address critical issues, such as poverty, hunger and access to clean water.

Massively multiplayer online games such as these encourage international collaborations and generate collective intelligence, McGonigal said, which can be used to help improve the quality of life around the world.

She singled out a number of online games, including Foldit, an interactive game designed by researchers at the University of Washington that asks participants to solve protein-folding puzzles. Scientists then use gamers’ solutions to design new proteins to help treat and cure specific diseases.

McGonigal said she wrote Reality Is Broken: Why Games Make Us Better and How They Can Change the World (Penguin Press, 2010) to examine in greater detail the cognitive and behavioral science behind games.

During her lecture, she discussed eustress, or positive stress. Although there is no physiological difference between positive and negative stress, eustress motivates people and allows them to meet self-imposed goals and expectations.

She then showed the audience several portraits of gamers in positive states of being—showing what she called their Epic Win Face.

“These are the faces we want to see when we tackle the world’s toughest problems,” she said. “I want people to make [this face]in the real world and not just in a virtual world.”

As director of game research and development at the Institute for the Future, McGonigal and her colleagues work to create Epic Win futures, “the insanely positive outcome that was so implausible you never thought you could do it.”

“We decide what kind of future we want to create,” she said. “What is the best case scenario.”

Her Epic Win future? She wants to see a game designer earn a Nobel Peace Prize by 2023.

“This is hard to imagine,” she said, “if you only think of games as escapist.”

The Fordham College at Lincoln Center Industry Leadership Series invites distinguished FCLC alumni to campus to speak about their profession or field of expertise.