skip to main content
Return to Fordham University
You are at:Home»Inside Fordham»To Save the Elephant, First Understand its Ancestors 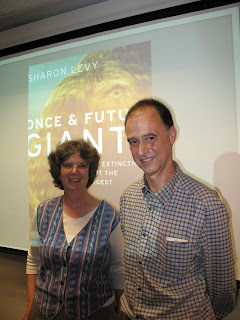 Science writer Sharon Levy admits to feeling sympathy for the “hard life” endured by a young female, Owosso, who lived some 13,000 years ago in the North American plains.

Owosso, according to Levy, lost all three of her infants before they reached a year in age. She, herself, was eventually eaten by a tribe.

What makes Levy’s compassion unique is that Owosso was a female mastodon and one of the last of the great Pleistocene megafauna, or Ice Age large animals.

On April 27, Levy told students and faculty at Fordham University that Owosso’s story, ancient though it is, still reverberates today in the lessons it offers scientists about environmental change and species’ survival.

“These big animals were just really awesome,” said Levy, author of Once and Future Giants: What Ice Age Tells us About the Fate of Earth’s Largest Animals (Oxford, 2011). “They were social animals who lived in packs. They lived at a time of drastic change in temperatures. And they all disappeared at the same time.”

Exactly what was responsible for the demise of the great herds of mastodons, mammoths, lions, saber-tooth tigers and other animals that roamed the great plains of North America is a topic of some debate, said Levy. It’s true that the Earth’s glaciers may have retreated during this period, possibly leading to the animals’ extinction through disease or loss of habitat. But, she said, there is also scientific evidence that humans began actively hunting during this time period with stone spear points. Remnants of these hunters, or Clovis people, have been found at 14 sites containing animal remains, said Levy.

“Science has long debated whether prehistoric people drove large Ice Age animals to extinction,” said Levy. “There is growing evidence that what did in the megafauna was a one-two punch. These species were already stressed by a changing climate, and then humans showed up and changed the balance.”

In 2000, Levy said a small but vocal segment of the scientific community led by geoscientist Paul S. Martin, wrote an article in Nature magazine advocating “Pleistocene rewilding.” This concept would repopulate the North American plains by bringing large animals (such as elephants) from Africa which are facing loss of habitat as stand-ins for the extinct species.

While Levy said many scientists found the idea “crazy”, she decided to research its potential by studying re-entry populations of wild mustangs in the California to Arizona regions of the Great Basin. American horses, she said, disappeared 13,000 years ago along with the other great animals, but mustangs were reintroduced by the Spanish in the 1500s.

Levy said the mustang population is a “rewilding success,” but the population is currently growing approximately 20 percent each year because there are no natural predators to keep its numbers in check.

Two better examples of rewilding, said Levy, are the Australian Dingo and the Aldabra Giant Tortoise introduced on the Island of Mauritius. The Dingo has helped preserve native Australian marsupial populations by attacking their predators; the tortoise has helped revive native vegetation by disbursing seeds in its feces.

Today, said Levy, the world’s human biomass is “far greater than the total biomass of the Ice Age megafauna, even at their most abundant moments.” By definition, said Levy, any animal 100 pounds or more is considered to be a “megafauna” species.

“If the system crashes the way we know it did 13,000 years ago, the toll will be taken on humans,” she said. “So I think we need to understand these animals because right now the megafauna are us.”

(Pictured above are Levy and Guy Robinson, right, instructor in the Department of Biology. Photo by Bob Howe.)