The student researchers were looking for a dominance hierarchy, which turned out to be based on a shared-rank structure, Casper said.

“We don’t know if this type of hierarchy might exist in the wild,” she said, “but it’s important because the species is near-threatened. It needs some attention if we are going to be thinking about conservation in the future.”

Casper and Flamio were among several students who took advantage of New York institutions and landmarks to create research presentations for the college’s 9th Annual Undergraduate Research Symposium, held on April 13. In all, some 317 undergraduates displayed and presented their original research at the event, held at the McGinley Center on the Rose Hill campus. 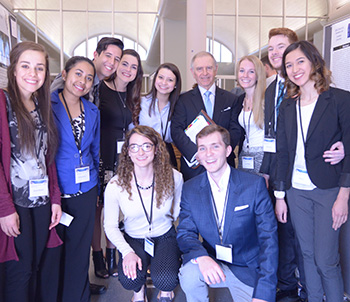 That same day, at nearby Faber Hall, students at the Gabelli School of Business held their own research fair. And the next day, at the Lincoln Center campus, some 123 student scholars participated in the Ars Nova Arts and Research Showcase.

The growth and popularity of research and research fairs on campus “is an integral part of the Fordham undergraduate experience,” said Maura Mast, PhD, dean of Fordham College at Rose Hill. “Through action, students take on their own learning.”

One of the Rose Hill symposium’s major supporters, Boniface Zaino, FCRH ’65, shared details of his path to becoming a researcher at Lehman Brothers. Prior to that, he had been working a glamorous job (but with a “mediocre paycheck”) at NBC. When he was offered the Lehman job, he said his immediate thought was “Research? So boring after riding up in an elevator with Harry Belafonte and Tony Bennett!”

“I thought I was going to sit in a library, but in point of fact it turned out to be a great opportunity to expand my knowledge,” Zaino said.

“When you do research, you have to get into this Zen state. You have to clear your mind of all prejudices and prior thoughts, and try to look at things as they are,” he said. “It develops a discipline … and you are accountable to it, because the rest of the world is going to rely on your work.” 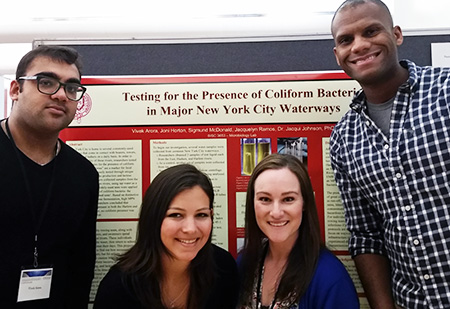 New York City waterways were the focus of the student team of Vivek Arora, Jacquelyn Ramos, Joni Horton, and Sig McDonald. The students measured the amounts of coliform bacteria in the Harlem, Hudson, and East rivers.

And integrative neuroscience major Arthur VanSuetendael chose Alzheimer’s disease as his topic. He analyzed “every single study” that was applicable to localizing music memory in the areas of the brain.

“[They’ve] shown that musical memories are preserved better than verbal auditory memories in dementia patients,” said VanSuetendael. His analysis found that the brain’s epicenter of music memory activation—one particular medial frontal region— is a region that still functions even in late-state Alzheimer’s.

“If we understand these cortical regions more, we can use the information to better craft the way we engage those with the disease.” 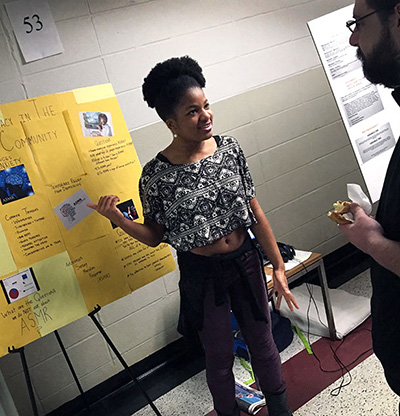 At the Lincoln Center campus, the wide array of original work that lined the Lowenstein Center’s halls ranged from integrative neuroscience experiments to performance jazz pieces.

George Horihan, a sophomore visual arts major, displayed his three-paneled sketch of a tree flanked by human arms and surrounded by water. The work, “Connections,” depicted the strained relationship between humans and nature.

“As we’ve become more dependent upon technology, we’ve become separated from nature, but there are things that we cannot separate ourselves from completely,” Horihan said. “To me, tree branches look somewhat like [human]veins, and veins themselves look like roots, so I wanted to visually represent those connections.”

Aja Singletary, a senior theater and sociology double major, investigated the relatively uncharted world of autonomous sensory meridian response, or ASMR, and its growth as a YouTube phenomenon.

ASMR, she said, is a tingling sensation some people feel in response to certain sights or sounds. A calming sensation, ASMR has been described as a feeling “like bubbles of champagne” starting at the base of the skull and descending to the shoulders and through the spine. ASMR can alleviate stress and anxiety, and has even been shown to temporarily relieve depression, Singletary said.

With this in mind, a group of individuals has taken to YouTube to create videos of people tapping objects, flipping pages of books, and doing other “triggering” tasks to induce ASMR in viewers.

What is noteworthy for Singletary is the ability of the “ASMartists” and viewers to use social media to form a close-knit community around an experience that can feel deeply personal.

“I argue that it is a vehicle for cultural sharing,” said Singletary. “The community has found a way to be not only social, but intimate with strangers around the world.”

As part of her research, Singletary is also looking at the gender and racial divides within the ASMR community. Females account for approximately 81 percent of creating these YouTube channels, and the majority are white females, she said.

“This brings up the question of who do we choose to be intimate with, and why,” she said.

Jonathan Crystal, PhD, associate vice president for academic affairs, said that for years, the “discovery of wisdom and transmission of learning” traditionally flowed from faculty to student.

“There’s been a profound shift in Fordham’s culture where now it is understood that undergraduate students—you—are also discovering wisdom,” he said. “And this represents the transmission of learning from you to us.”

–Joanna Mercuri contributed to this article.