Biologist Jason Munshi-South, Ph.D., has been studying rodents native to New York City for years, but he had long managed to resist researching rats.

“People seem to have a learned and possibly inherited revulsion to them,” said Munshi-South, associate professor in the Department of Biology. “Which makes sense. Rats are a very obvious symbol of urban decay.”

But this summer Munshi-South and a team of student researchers undertook a study of the urban pests to collect DNA samples from populations across Manhattan neighborhoods. While much is known about the typical Norway lab rats, he said, little is known about rats in the urban wild.

The samples are being analyzed in Munshi-South’s lab at the Louis Calder Center Biological Field Station to track how rats disperse through the urban landscape, and whether genetic mutations are specific to certain Manhattan communities. 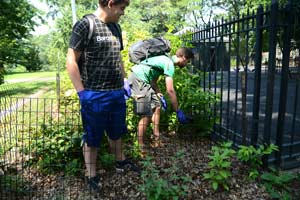 “Our analysis will be geared toward understanding the general relatedness between rats in different places in Manhattan, and whether the composition of the landscape determines those relationship patterns,” said Munshi-South, whose project is called Cityscape Geonomics of Rats in New York CIty. “Do they use subway tunnels, for example, to move north and south? Are sewer tunnels of a certain age associated with movements across the city? Are certain mutations common in one part of the city more than another?

“If we can successfully model how rats move around the city, we can better control their populations, or modify the landscape to change behavior.”

The research team set out this summer to collect rat DNA from all 41 Manhattan zip codes. The project soon faced its share of obstacles. First, rat trapping had to be done within “stations,” or black plastic containers, in order to protect children, dogs, and other animals from accessing the traps.

Furthermore, the return rate was approximately 5 rats per night for every 100 traps set—largely because, after centuries of being hunted by humans, rats have developed a sixth sense.

“A lot of rats that have been subject to trapping efforts exhibit neophobia,” said Munshi-South. “If you put something new in their environment, they will avoid it for as many as seven days.”

Once the team has collected the DNA samples from hundreds of rats, they will sequence full genomes from rats around the city. The genomes, said Munshi-South, can actually reveal the historical demography of the city’s rat population and show which genetic variants were lost when rats were introduced from Europe to New York City. It can also reveal which genes have since evolved, such as a gene related to resistance to the poison warfarin.

Ick factor aside, said Munshi-South, people are also “amazed by rats because they seem to be able to live almost anywhere.

“You can really never get rid of them and almost certainly they will outlast humans in a lot of ways on the deeper evolutionary time scale,” he said.