skip to main content
Return to Fordham University
You are at:Home»Colleges and Schools»Fordham College at Lincoln Center»Albalimulus bottoni: Horseshoe Crab Named for Professor Mark Botton
Botton at 2017 survey of horseshoe crabs on Plumb Beach in Brooklyn. Photos by Bruce Gilbert and Tom Stoelker; Graphic images courtesy Russell D. C. Bicknell and Stephan Pates
In what might be the most enduring compliment in the field of science, two professors specializing in horseshoe crabs have named a newly found fossil specimen for Mark L. Botton, Ph.D., professor of biology in the Department of Natural Sciences at Fordham College at Lincoln Center and the Environmental Science Program. The specimen, which originated in Scotland some 350 million years ago, is now called Albalimulus bottoni. 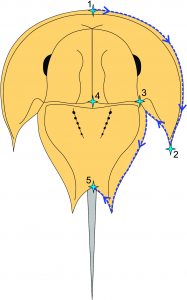 Jason Morris, Ph.D., professor and chair of Natural Sciences, said the honor is fitting, noting Botton “literally edited the book on horseshoe crabs.” Botton has been studying the crabs since the 1970s and is considered an expert internationally. Not only has he published extensively about the crabs in numerous scientific papers, his research has also been tailored to inform policymakers on how to proceed with beach replenishment projects in a manner that aims to balance the needs of the crabs with those of humans. He is a co-editor of Changing Global Perspectives on Horseshoe Crab Biology, Conservation and Management (Springer, 2015). He also co-chairs the International Union for Conservation of Nature (IUCN) Horseshoe Crab Specialist Group.

The horseshoe crab fossil received its new name via a paper written by Russell D. C. Bicknell, Ph.D., a post-doctoral research fellow at the University of New England in Armidale, Australia, and Stephan Pates, Ph.D., of Harvard University’s Department of Organismic and Evolutionary Biology, which appeared in the journal Scientific Reports. In an email from Australia, Bicknell called Botton “an exceptional colleague.”

Botton said the honor took him totally by surprise.

“The naming of the species for me was out of nowhere; I had no inkling that a new species had been found, much less that they decided to name it after me,” he said, adding that he was very flattered.

Horseshoe crabs alive today are very similar to their ancient cousins, leading many to call them “living fossils.”

“The term ‘living fossils’ depicts the idea that you have an animal which has undergone rare, relatively little morphological change over one period of time,” Botton said.

While they may have changed little over hundreds of millions of years, that does not mean the staying power of horseshoe crabs is assured for millions of years to come.  Botton noted that the American horseshoe crab is officially listed as vulnerable on the IUCN Red List of endangered and threatened species. 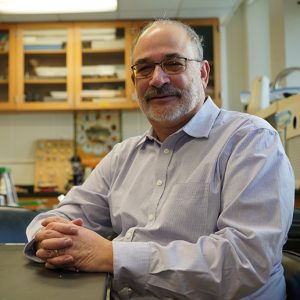 “There are populations that are relatively healthy, but in New England and in the south of Florida, the populations are small and considered to be more at risk,” he said. “We also recently completed a revision of the status of the so-called tri-spine horseshoe crab,” he said.

“We (the international scientific community) decided to go with an older, more neutral name of tri-spine horseshoe crab; that way everybody’s happy,” he said, unwittingly noting the importance in a name. “That’s why I prefer to use the Latin names, but most people don’t.” 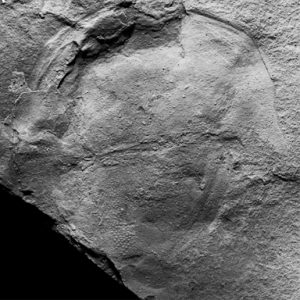 Regardless of the name one chooses, the tri-spine species is now listed as endangered, due to the crabs’ use for medical purposes and for food. The rise of sea level and the loss of spawning habitat pose another, broader threat.

“A lot of areas that used to be beaches where horseshoe crabs could lay eggs have now been developed either for industry, housing, or where they put up sea walls, all of which all take away the spawning habitat,” he said.

Here in the United States, the dangers to American horseshoe crabs come from fisheries that chop the crabs up and put them in traps that are used to catch eels and whelks, he said. Also in the U.S., the crabs’ blue blood is harvested for medicinal purposes, but that only accounts for a mere 10 to 15% mortality loss of the crabs caught for that purpose.

“They don’t bleed them bone dry. Just like when you go to give blood, they don’t take everything out of you. They want the animal to survive. So, there’s some stress due to handling and taking them out of water and so forth. But the estimates of the blood-related mortality are much less than the direct mortality from using them as bait,” he said. 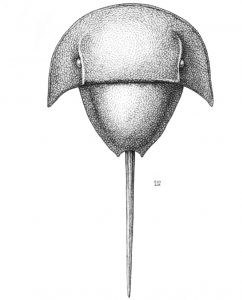 An idealized reconstruction by Elissa Johnson

Though he is personally concerned with the fate of the crabs, he said he doesn’t opine on conservation matters in his classes which are part of the Environmental Science Program he co-directs. Instead, he simply presents the science and lets students draw their own conclusions.

“When I’m in class I don’t try to steer a conversation in a particular direction. These can be viewed as political issues. I think some of the students almost want me to be more opinionated, but I don’t feel it’s my place. I feel it’s my place to give them the facts and let them judge.”

Nevertheless, he said his students talk to each other all the time about environmental issues and they tend to be “a pretty passionate group.”

“I mean, it’s hard to ignore what’s going on outside of the classroom right now,” he said.

Botton with students on Plumb Beach in Brooklyn