Urban living has undergone a renaissance over the last two decades, as more people are choosing to work, play, and call cities home. But the changes that have made them more palatable have sometimes brought about unintended consequences.

Annika Hinze is researching the best practices for making cities just, fair, and equitable for all.

Hinze, an assistant professor of political science and the new head of Fordham’s urban studies program, is working on a book examining the effects of three large-scale, finished or nearly finished urban developments: Columbia University’s Manhattanville campus extension, a housing project in Vancouver, and an arena in Berlin.

Two of the cases have personal resonance for Hinze, as she was born and raised in Berlin, and, until just recently, called Manhttanville home. She decided to include a third project, in Canada, because like the other two, it took place in a federalized democracy with a lot of political fragmentation and a lot of emphasis on local decision-making.

The Berlin arena is part of a larger entertainment area. The Vancouver housing project exists on the site of a former department store that closed in 1992, was overtaken by squatters, and was acquired by the city. The local government originally proposed developing it into affordable housing, but has instead settled for a building with 80 percent market rate apartments, and 20 percent public housing.

Both projects generated more vociferous opposition than any projects in New York City, she said. Her interests include the processes that led up to their construction and implementation, what democratic deliberations were held, and to what extent the community was involved.

In New York, the state government resorted to eminent domain to move the Manhattanville project forward, whereas no such actions were necessary in Berlin or Vancouver.

Hinze said she’s not advocating for direct democracy, but rather trying to tease out practical implications from the projects.

“A lot of literature has involved complaining, but with very few practical conclusions about what can be done. I want to know who are the actors are, what are they’re doing now, and what they should they be doing [for the future of cities],” she said.

Hinze said she’s also very interested in how local residents are displaced by such projects. Changes that accompany large-scale urban redevelopment projects are often dubbed “gentrification,” but displacement complicates the concept, she said.

Some displaced residents are moving to the suburbs, while suburbanites decamp for the city, in what is sometimes known as the “great inversion.” But again, it’s complicated, as one can nowadays find pockets of socioeconomic and racial segregation in both cities and suburbs. 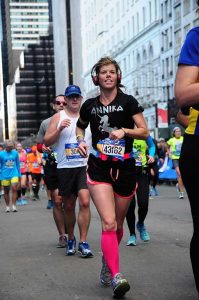 “I think we’re increasingly looking at a metropolitan mosaic in terms of the ways that communities live, income levels, and racial and ethnic makeup,” she said.

Because cities are growing in importance around the globe, Hinze said she’s eager to continue partnerships with institutions in Pretoria, Berlin, and Amsterdam, and recruit more international students to study in New York. Closer to home, courses like The Urban Lab, which is being co-taught this semester by former urban studies director Rosemary Wakeman, Ph.D., professor of history, and Fordham Law’s Sheila Foster, exemplify the way the urban studies degree is truly interdisciplinary.

“That’s very important because you can’t just say, ‘I’m interested in gentrification, but I’m only going to study it by means of this particular literature.’ It’s also a legal issue, a sociological issue, a political issue, and potentially an economic one,” she said.

“So the fact that we have faculty with expertise in all these different areas gives us a lot of strength in terms of how we teach.”

Researching her book, teaching political science, taking over a program, and raising her 3-year-old daughter has kept Hinze busy—but not so much that she couldn’t fit a 26.2 mile run into her schedule. On Nov. 6, Hinze ran the New York City marathon, finishing in 4:17. As part of the race, she raised $2,500 for Bronx Works, a charity in the South Bronx’s Mott-Haven area that helps residents improve their economic and social well-being.

“I live and work in the Bronx, and I feel like the urban studies program’s mission is to be involved in the Bronx communities, especially those around Rose Hill,” she said.

Training for the race required hitting the streets for long runs before sunrise, but Hinze said it balanced out the days when she had to sit through meetings. She was also grateful when, during the Marathon run, she saw staff members of Bronx Works cheering her on just past mile 20.

“It made me really happy that I could support them,” she said.