Photos by Marisol Díaz-GordonNever judge a person until you’ve walked a mile in their shoes, the maxim goes. But what if walking that route involves contemplating the unthinkable?

In the United States, where just 0.2 percent of the population serves in the armed forces—compared to six percent during World War II—the threads that bind veterans and civilians together have weakened, as their lives rarely intertwine.

A new initiative spearheaded by the Veteran’s Administration (VA) aims to bridge the divide through a training program that pairs business leaders and veterans together for a full day of lectures, workshops, role-playing, and performances.

Joseph Geraci, Ph.D., a retired lieutenant colonel in the Army and founder and director of military relations for the Resilience Center for Veterans & Families at Columbia University, said the trainings, which have been taking place under the auspices of the James J. Peters Veteran Affairs Medical Center, where he is on staff, are based around a simple premise: If an employer can put themselves in the shoes of a veteran, they can help them make the leap to civilian life. 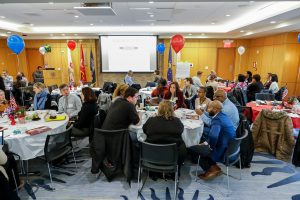 The training attracted about 70 attendees to the Rose Hill campus.

“As a veteran, I’m expected to just merge into civilian society, acclimate to everyone else, and to some extent disavow my identity as a warrior and as a military service member,” said Geraci, who based the training on findings he published in his doctoral dissertation, Trained, Peer Mentorship and Veteran Support Organization Membership to Assist Transitioning Veterans: A Multi-arm, Parallel Randomized Controlled Trial (A Preliminary Investigation).

“That can be really frustrating and hard and further the divide, because there are not a lot of people who can relate to me. At the VA where I work, for example, there’s not one clinical psychologist who’s a veteran. Even in organizations where people are dedicated and are hired to assist me, they really don’t understand me on a very deep, personal level.”

That isolation manifests itself in the workplace, as the average veteran today will change jobs three times in the first two years after they’ve re-entered the civilian world.

A Challenge for Students

The training on Dec. 12 was the sixth of its kind and the first that Fordham supported. It drew attendees from firms and institutions such as Bloomberg LP; Mount Sinai Health System; entertainment firm Avant Gardner, LLP; and the David Lynch Foundation, which promotes transcendental meditation. Last year, students in a consulting class taught by Michelle Weber, Ph.D., a clinical assistant professor at the Gabelli School of Business, helped Geraci launch his first training outside of New York, in Charlotte, North Carolina. This fall, Weber gave students in a similar class, called Applied Social Innovation, the option of working on one of three projects. One of them was organizing the Dec. 12 event at Rose Hill. 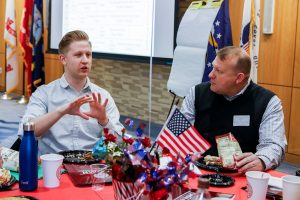 Attendees took part in sessions such as “Military Culture, and Awareness of Our Own Personal Beliefs/Attitudes.”

“This country has a really big suicide problem with veterans, and it hasn’t been totally proven yet, but what I contend is that it is tied to work. What we know about work is veterans don’t have a hard time getting jobs, but they have a hard time sticking to it, whether they get fired or quit,” she said.

“There’s something going on in this country with the assimilation part. I’ve seen it in my classrooms. It’s sad. It could be so much better than it is.”

The Dec. 12 event became, in essence, a final exam for the team of students tasked with coordinating the logistics, from reaching out to participants and working with caterers, to securing space in Faber and Campbell Halls. Julia Townsend, a junior at the Gabelli School majoring in business administration, was one of them. A native of Washington, D.C., whose family has served in various capacities in the military, she felt drawn to Geraci’s cause the moment he presented to the class.

“When Joe spoke, he was really personable, and he talked about suicide from a very personal perspective about his friends passing away and him having PTSD. I felt like helping him be successful could in some small way help other people,” she said.

The day started with sessions such as “Knowledge and Understanding of Military Worldview, Veteran Risk/Protective Factors, and Effective Skills,” and “Military Culture, and Awareness of Our Own Personal Beliefs/Attitudes.” The afternoon kicked off with “Operation Restore Hope,” a mock training exercise where participants were tasked as a team with rescuing a hostage from a room of hostile forces. It ended with a dramatic reading, by professional actors, of scenes from Sophocles fifth-century play Ajax, which chronicles the fate of the Greek warrior Ajax the Greater after the events of The Iliad and the Trojan War. 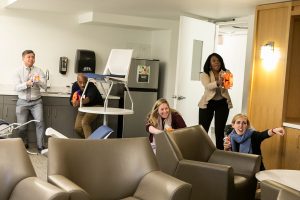 A mock training exercise called “Operation Restore Hope” got attendees to imagine what it’s like to focus exclusively on a mission at hand.

Daniel Gomez, GABELLI ’18, an Army veteran and founder of First Person Xperience L.L.C., helped facilitate some of the sessions. He was most impressed with Operation Restore Hope. As part of the post-mission debriefing, participants were asked what they were thinking about as they attempted the rescue. Answers ranged from “the person to the left of me,” “the person to the right of me,” “the mission”, and “don’t get shot.”

When they were asked what they were not thinking about, Gomez said a look of confusion would cross their faces.

“I told them, ‘You weren’t thinking about your family, your Christmas party, or what kind of car you were going to buy.’ The only thing you could think about at these seconds while you were entering the room was the mission. Pretty intense,” he said.

“So now, go back to your normal life, pushing paper or working with a broken copy machine, and now it just seems completely different. That’s not a bad thing, but it’s something we all need to understand. Even this simple thing really helped them get a quick understanding of the types of things we go through. It was like their ‘aha’ moment.”

You Never Know How Deep It Is

Miguel Melbourne, GABELLI ‘13, an associate at JustWorks, a human resources partner for small businesses, echoed Gomez’s take on the mock training exercise and said the day went by faster than he expected.

“From start to finish, it took you to so many places. You cried, you laughed, you sat down, you got up and did exercises, there was a play at the end. It was beyond anything I’ve ever experienced,” he said. 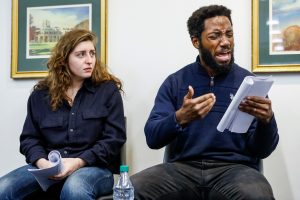 He was especially moved by a session in which Geraci took off his suit jacket, donned his military uniform, sat in a chair perched atop a roundtable, and told the story of his own service, including details about three friends who were killed in battle.

“There might not have been one dry eye in the room,” Melbourne said.

Because his younger brother is in the Army and his company’s CEO is a veteran, Melbourne said he felt confident going into the training that he could relate to veterans. That session made him realize he still had much to learn.

“There’s no way to be prepared for it, but just having that awareness that these conversations may not be as easy as I thought, was probably one of the most valuable and touching parts for me.”