skip to main content
Return to Fordham University
You are at:Home»Colleges and Schools»Graduate School of Arts and Sciences»Theology Student Journeys to Auschwitz

A theology student will get firsthand experience of the Auschwitz-Birkenau concentration camp this summer to examine the ethical responsibilities of scholars and professionals and how their work affects global atrocities.

Eric Martin, a doctoral student studying systematic theology, is the recipient of a Fellowship at Auschwitz for the Study of Professional Ethics (FASPE). Beginning this week, Martin will join graduate students from five different disciplines—business, journalism, law, medicine, and religion—for a two-week intensive study of the Holocaust and its impact on contemporary ethics. 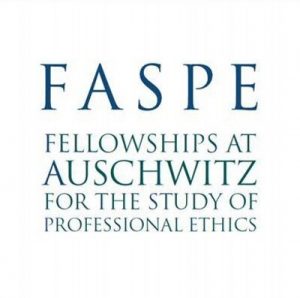 The FASPE program highlights the impact that respected leaders and practitioners in these professions had during the pre-War World II era on designing, enabling, and executing the crimes of Nazi Germany.

“As a Christian, I see my role as a peacemaker, which is what drew me to this fellowship,” Martin said. “I believe this is going to be a powerful and possibly transforming experience.”

The fellows will begin their studies in New York, then travel to Berlin, Krakow, and Auschwitz (the German name for a Polish town called Oświeçim). Over the two weeks, the fellows will consider what roles of each of their professions played in Nazi Germany and how the moral codes of these professions were distorted or dismantled entirely to enable the Holocaust.

Martin will look specifically at how Christian theology—particularly the view of Judaism as a “stilted form” of Christianity—was used to condone Nazi war crimes. By understanding how this occurred in the past, Martin said, we have a better chance at preventing theologically-grounded violence in the future.

“It was this idea that Jews are incomplete in their faith that led to violent ideologies in Nazi Germany. Nazis played on this theology in their rationale for the Holocaust,” Martin said.

“It is important that theologians don’t take doctrine more seriously than human beings and human dignity. If those two conflict, then it is the doctrine that should go. That mistake seems to have been a key element in the Holocaust… and it’s something the church is still working on, especially now in terms of Christian-Muslim relations.”

Run under the auspices of the Museum of Jewish Heritage—A Living Memorial to the Holocaust, the fellowship program involves seminars and lectures by FASPE faculty; historical, cultural, philosophy, and literary study; survivor testimony; and workshops in Berlin, Auschwitz, and Krakow.