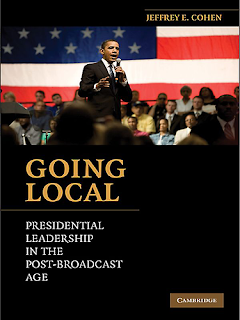 Jeffrey Cohen, Ph.D., Chair and Professor of Political Science at Fordham, has been awarded the 2012 Goldsmith prize for best academic book.

Going Local: Presidential Leadership in the Post-Broadcast Age (CUP, 2010) was honored as a book “that best fulfills the objective of improving democratic governance through an examination of the intersection between the media, politics and public policy.”

The award, which is given by the Joan Shorenstein Center on the Press, Politics, and Public Policy at the John F. Kennedy School at Harvard University, follows on the heels of the 2011 Neustadt Award, which was given the American Political Science Association for the best book on the presidency.