skip to main content
Return to Fordham University
You are at:Home»Politics and Society»New Certificate Program to Offer Expertise in Polling

In the run up to national elections, not a day goes by when a poll is not released, analyzed, and pored over by pundits, news anchors, and ordinary citizens eager to get a sense of where the country is headed.

This fall, Fordham’s Graduate School of Arts and Sciences will offer students the opportunity to master polling’s unique blend of science and art with an advanced certificate in public opinion and survey research. The certificate, which is being offered through the Department of Political Science, is an extension of the Elections and Campaign Management master’s program.

Registration for the certificate program is currently open; students can complete it in a year with a full-time course load or in two years on a part-time basis. The curriculum comprises five courses: Introduction to Quantitative Analysis, Political Survey Research, American Political Behavior, Survey Research Data Analysis, and Public Opinion Certificate Practicum.

The last two courses have been created specifically for the certificate program.

For the practicum, students will be designing and analyzing a new annual survey, called the Fordham American Faith Poll. 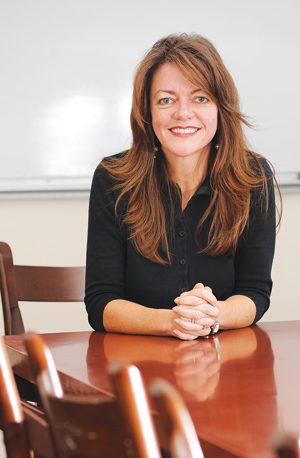 Monika McDermott, Ph.D., professor of political science and director of the Elections and Campaign Management program, said the faith poll is what really distinguishes this certificate program from others that are similar.

“Each year, the students will decide exactly what the poll will be on, they will write the questions, it will be fielded by a professional calling house, and then the students will do data analysis, and we’ll release the results publicly,” she said.

“This certificate is designed to teach students a specific skillset, one that is useful in a whole range of fields.”

In addition to giving students hands-on experience creating, executing, and analyzing a poll, McDermott said the Fordham American Faith Poll will address an area of American life that she says has been overlooked by most pollsters today.

“Most polling is just horse race polling about politics, and doesn’t delve into the deep belief structures and aspects of American faith and culture that we’d like the poll to do,” she said.

That’s true even of the high-profile polls conducted by Monmouth University and Quinnipiac University, she said, which focus a great deal of time on the presidential race.

“This is going to be up to the students, but if it were to be about politics, it would probably be more about how Americans relate their faith to politics,” McDermott said.

“It could also be just about faith in Americans’ lives. How do Americans worship? How much do they worship? How important is it to them? These are questions we don’t really have in-depth answers to.”

McDermott acknowledged that the polling industry’s reputation took a bit of a hit when Donald Trump won the presidency in 2016, but she said it was undeserved. After all, she said, most polls had Hillary Clinton up by 2 to 3 percentage points, and in the end, she won the popular vote while losing the Electoral College. One thing she said students who earn this certificate will come away with is a better understanding of not only what polls can do, but what they can’t do.

“People like to use polls to predict things, when that’s not what polling is supposed to do. I think we’ve gotten so wrapped up in wanting to know what’s going to happen in an election that we expect polls to be a magical predictor,” she said.

Since courses such as Survey Research Data Analysis and Quantitative Analysis are not exclusively concerned with politics, McDermott said the certificate will also be of interest to anyone looking to work in market research and data analytics.

“There’s whole host of fields that want people who can measure public opinion. That’s what we’re looking to train students in,” she said.

“It’ll still have a focus on political polling just because it’s tied to the elections and campaigns management program, but it’s not going to be limited to that in any way.”