The country may be more divided than ever in the wake of the presidential election, but on Nov. 15, New York City Mayor Bill de Blasio and Oklahoma City Mayor Mick Cornett vowed to work together to improve mental health services across the country.

“A mayor’s work is rarely partisan,” said Cornett, a Republican who is currently president of the U.S. Conference of Mayors. “The work that we do is about providing services and trying to create a better quality of life in our cities. So we look for opportunities to work across the aisle.” 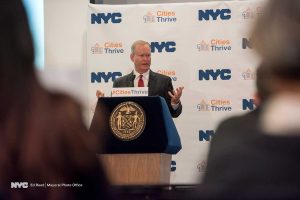 De Blasio and Cornett spoke at Fordham’s Lincoln Center campus at the closing session of Cities Thrive, a two-day conference hosted by Fordham and sponsored by the City of New York. The conference was organized by First Lady Chirlane McCray, and featured workshops geared toward helping leaders address mental health challenges before they become serious. One in five Americans suffers from conditions such as anxiety, depression, or substance abuse, and there is a still a huge stigma attached to it that prevents forthright conversations, said conference participants.

Indeed, it took a violent, shocking death to bring the problem to the fore for Oklahoma residents, Cornett told attendees. In August 2015, Mark Costello, the state’s commissioner of labor, was stabbed to death by his oldest son, who suffered from schizophrenia.

Partly in response, on Nov. 8 Oklahoma voters passed two new statutes related to criminal justice reform: One to reclassify certain property offenses and simple drug possession as misdemeanor crimes, and another to redirect monies saved by sending persons into mental health services instead of into the prison system. This, Cornett said, illustrates how mental health is an issue that has no ideological stripes.

De Blasio, in a nod to the election of Donald Trump to the presidency, said he is thrilled to have Cornett as the voice for cities around the country. There is power and hope in bipartisanship, he said. 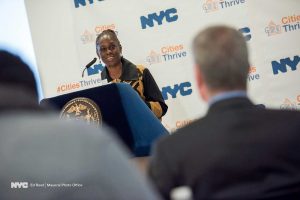 “People have assumptions across states and regions, but God bless the people of Oklahoma; they took an important stand on behalf of addressing the issue of incarceration and the issue of mental health. This is something we have to foster everywhere in the country,” he said.

“When we show how universal it is . . . [and]when it takes on that meaningful and real aura of bipartisanship, the movement gains power. We have a chance to do that here.”

Joseph M. McShane, S.J., president of Fordham, called the attendees “unsung heroes” who are doing the work of God.

“Mental health services are often seen as an add-on, something to be considered when your constituents’ most basic needs are met, or when their more showy needs are met,” he said.

“But there’s nothing more central to person’s sense of well-being than mental health.”