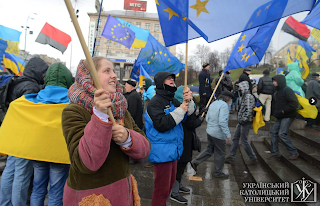 The European Union suspended all negotiations with Ukraine on Dec. 15 over a historic trade pact, as 200,000 converged on the main square in Kiev to demand the government align itself to Europe rather than Russia.
Demonstrations have been ongoing for more than two weeks in Kiev’s main square, known as Maidan, in an effort to put pressure on President Viktor Yanukovich. Because the call for European integration sparked an initial wave of protests, the demonstrations are being referred to as “Euromaidan.”
Olena Nikolayenko, Ph.D., an assistant professor of political science and Ukranian native who has a good handle on the political climate in Kiev, gave us her take on the situation.
“A group of Fordham students went to the Ukrainian Catholic University in March 2013, and another group of Fordham students is scheduled to participate in Global Outreach project in the  Ukraine this coming March,” she says. “The Ukrainian Catholic Church condemned the use of violence against peaceful protesters and some priests even joined the protest events, acting as human shields between protesters and the riot police or reading prayers in front of the police cordon to reduce the likelihood of violence.”
The Fordham student trip to the Lviv, Ukraine, last spring was part of Nikolayenko’s interdisciplinary course, “Youth and Politics,” in which students compared patterns of political behavior among American and Ukrainian youth.
Nikolayenko’s book, Citizens in the Making in Post-Soviet States (Routledge 2011), examined political attitudes of adolescents in Russia and Ukraine. Her current research project focuses on nonviolent youth movements in five post-communist states: Azerbaijan, Belarus, Georgia, Serbia, and Ukraine.
Here’s our Q & A with Nikolayenko:
1) Why are Ukrainians protesting?
Initially, Ukrainians poured into the street to put pressure on the incumbent president Viktor Yanukovych to sign a trade agreement with the European Union. This trade agreement gives Ukrainians, especially the young generation, some hope of living in a more democratic and less corrupt society. But the government showed utter disregard for citizens’ political preferences and unleashed violence against peaceful protesters. The riot police ruthlessly dispersed protesters in the capital city’s main square at 4 am on November 30, and scores of people, including mostly university students, received head injuries. Images of blood-stained youth caused a public backlash against the current regime. The number of protesters grew and they expanded the list of their demands, calling for the resignation of the incumbent government, end of political violence, and implementation of democratic reforms in the country.
2) They are also protesting the country’s “frayed and corrupt political system.” Has this been boiling for a while now?
Ukraine has seen a large wave of mass mobilization against the regime during the 2004 presidential elections. But the newly elected president – Viktor Yushchenko – failed to deliver on his campaign promises and drastically overhaul the political system. Now another cohort of young people is coming of age and demands democratic change.
3) Are the demonstrators mostly young people or are diverse groups of demographics also protesting?
University students constitute a large share of protesters. They grew up in the post-communist period and they defy the idea of living in a repressive political regime. A number of the middle-aged also support closer integration with the European Union because they want their children to have a better future and live in a “normal” country free of corruption and repression.
4) Can this potentially turn into an Occupy Wall Street, where although they had numbers, they didn’t have a focused leadership, so the police were able to shut demonstrations down?
Lack of a single political leader facilitated, rather than inhibited, mass mobilization against the regime. No political party could have brought so many people into the street, and leaders of the opposition political parties still cannot figure out how to capitalize upon this outbreak of public outrage and extract concessions from the current regime. Unfortunately, it will be incumbent upon these inept political leaders to find a political solution to the problem.
5) What should the Ukranian president and his administration be doing?
Protesters articulated a few specific demands, including the resignation of the incumbent government, the prosecution of officials responsible for political violence, and the release of political prisoners. Moreover, Ukrainians demand taking steps toward signing a trade agreement with the European Union.
Rather than entering negotiations with protesters, Yanukovych decided to use violence again. On December 11 the riot police again attacked protesters in downtown Kyiv. The President of Ukraine should resign because he lost any shred of legitimacy in the eyes of Ukrainians.
6) What should the United States play, if any?
The United States can help Ukrainians in their struggle for democratic change by becoming a more active player in Eastern Europe. Since the collapse of communism, only three out of fifteen former Soviet republics consolidated democracy and became members of the European Union. Most citizens in the post-Soviet region still live in non-democracies. And President of Russia Vladimir Putin is obsessed with the idea of establishing the Eurasian Union and pulling the former Soviet republics back into his sphere of influence. As one of the most powerful countries in the world, the United States can serve as a champion of democratic values in the region and obstruct Russia’s systematic efforts to reassert its supremacy in the international community.
More specifically, American can sign one of the petitions created by a group of concerned citizens: https://petitions.whitehouse.gov/petitions. A number of petitions request the imposition of sanctions on specific members of the Ukrainian government.
There is also a call for the US boycott of the Winter Olympic Games, to be held in Russia in February 2014. The United States boycotted the 1980 Olympic Games in Moscow to protest against the Soviet invasion of Afghanistan so it might take a clear stance in defense of democratic values and condemn authoritarianism in Russia through such action.
Fordham UniversityGlobal OutreachInternational Politics
Share. Twitter Facebook Google+ Pinterest LinkedIn Tumblr Email