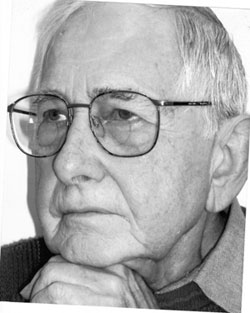 Trensky emigrated from his native Ostrava, Czechoslovakia in 1956, fleeing oppression under communist and, earlier, Nazi rule. He studied for a year at Vienna University before enrolling at Harvard University, where he earned his doctorate in Russian literature in 1962.

He came to Fordham in 1964 and joined what was then Fordham’s Russian Institute, which he eventually led. For 44 years he taught Russian literature and comparative drama in the Modern Languages Department, earning him the Bene Merenti medal in 2004 for 40 years of service to the University. During this time he published widely, including two books,Czech Drama Since World War II (M. E. Sharpe, 1978) and The Fiction of Josef Skvorecky (Palgrave Macmillan, 1991). He also contributed frequently to Czech theater journals on New York, Berlin, and Czech theater and cultural topics.

After retiring in 2008, Trensky divided his time between New York and Prague. He continued submitting annual essays on the Salzburg Festspiele and the Berliner Theattertreffen to the Prague journal Svět a divadlo (World and Theater), which he had done since 1993.

Trensky is survived by his wife, Misha Harnick; a son, Michael, from his first marriage; and two granddaughters.