skip to main content
Return to Fordham University
You are at:Home»Politics and Society»Fordham-Designed Poll Reveals Attitudes, Inequities Prevalent During COVID-19

When Monika McDermott, Ph.D., met in January with students enrolled in the inaugural cohort of the Graduate School of Arts and Science’s advanced certificate in public opinion and survey research, she cautioned them that it’s not uncommon that polls sometimes need to be changed at the last minute to reflect current events and the concerns of the public.

“You need to go with what’s newsworthy and with what’s going to garner the public interest and inform people, because that’s the whole reason for doing this,” she told the students, who were designing a survey on major issues facing Americans today. 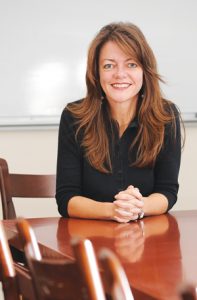 She had no idea at the time—weeks before the COVID-19 outbreak forced the University to close its campuses—that the lesson would be so timely.

“I never in my wildest dreams imagined this scenario, in these extreme circumstances,” said McDermott, professor of political science and director of the Elections and Campaign Management master’s program.

Working remotely, McDermott and the four students ripped up the poll they’d spent a third of the semester working on and drafted 23 brand new questions that examine American society in the time of COVID-19.

The result is the Fordham Poll, a survey that was originally designed to address areas of American life that have been overlooked by most pollsters today but was retooled to reflect the life during a pandemic. The results of the poll, which was conducted by NORC at the University of Chicago, were published the last week of April.

It covered areas such as the upcoming presidential election, how the pandemic has affected black Americans, the role that faith is playing in American’s lives, and people’s attitudes toward health care. It took place between April 16 and April 20 among 1,003 respondents nationwide by phone and has a margin of sampling error of 4.33 percentage points.

Faith in Governors, Not President

The first group of questions, detailed in The Coronavirus, the Election, and Daily Life section, revealed that Americans are most likely to turn to public health officials, their state governors, or friends and families for guidance during the coronavirus pandemic. Only 43% of Americans say President Trump is a very or somewhat important source of guidance at this time. McDermott said that perhaps as a result, he trails his presumptive challenger in the November presidential election polls, Joe Biden.

A Nation Divided by Illness

Questions grouped together in the Black Americans Bear the Burden of Coronavirus section showed the emotional toll the virus is taking on black and Latinx Americans, as evidence has emerged showing that coronavirus infections are disproportionately higher in areas with high minority populations.

Nearly half of black and Latinx Americans surveyed reported being extremely or very worried that they or someone in their family will contract the virus, compared to only 38% of whites. Additionally, black Americans are more likely than either white or Latinx Americans to be on the front lines of the coronavirus pandemic, with higher proportions still required to show up to a workplace. They also reported higher rates of personal infection, and of the death of someone they personally know.

McDermott said she considered these findings to be the most significant in the poll.

“The experiences of white and black Americans, and the disparity between those two groups, was not shocking, because we knew they would be there, but they really were so different. The disparity is so huge,” she said.

“It was very sobering to see those numbers and to realize it’s not uniformly affecting people. To get a sense of that in a public opinion poll was really important.”

The Role of Faith

And how are Americans in general coping? In a section titled Faith and Coping with the Coronavirus Outbreak, pollsters learned that a large majority has found consolation in their religious or spiritual faith.

White evangelical Protestants reported being helped the most by their faith, while three-quarters of mainline Protestants and 62% of Catholics reported that faith has somewhat helped them during the pandemic.

“Religious and spiritual faith is important sustenance for most Americans during this time of crisis,” said McDermott. “Faith is helping them get through.”

The last section, The Coronavirus and Attitudes towards Healthcare in America, found that despite apparent gaps in the U.S. health care system during the coronavirus outbreak, Americans are generally satisfied with the system’s performance.

More than seven in 10 Americans reported being satisfied with how the American health care system is working during the coronavirus pandemic—including 26% who are very satisfied— while only 28% are dissatisfied. Satisfaction transcends partisan affiliation, with 64% of self-described Democrats, 69% of independents, and 80% of Republicans expressing satisfaction.

That said, McDermott noted that the findings indicate that the crisis may be driving more Americans to support a government-run health care system. That’s because respondents also expressed support for guaranteed quality health care for all Americans, those infected with the coronavirus, and other groups, regardless of party affiliation. Support for access to quality care regardless of citizenship status was also high.

McDermott said the poll results were by and large in line with what the class expected.

On the other hand, the experience the class had is unlikely to ever be replicated.

“Coming up with questionnaires is the most labor-intensive part of polling. Designing questions in a way that you get the answers that accurately measure people’s true attitudes and behaviors is one of the harder things to learn in polling,” she said.

“Going through that with the students was in way, a really special semester, because they got to go through it twice with two different surveys.”