skip to main content
Return to Fordham University
You are at:Home»Inside Fordham»Drone-Enabled Targeted Killing at Center of Conference Debate

Jeh Johnson, former General Counsel for the Department of Defense, advocated for greater transparency regarding the United States’ use of drones for targeted killings.

“I believe the idea of a national security court is worth serious consideration, for the sake of our democratic process. I see certain advantages, but I also see a number of legal and practical problems. The advisability of the idea depends in very large part on the scope of what it is the courts will review,” he said.

Johnson’s talk, “A ‘Drone Court’: The Pros and Cons” was the keynote speech for “21st Century Warfare: Law, the Enemy, and the Battlefield,” a daylong conference on March 18 sponsored by the Fordham Law Center on National Security and held on the Lincoln Center campus.

Johnson pronounced himself a skeptic of a “drone court,” a suggestion that has been floated in foreign policy circles that could be modeled after the Foreign Intelligence Surveillance Act (FISA) court proceedings.

He noted that although current policy—which allows for the use of drones and other force against terrorists who are plotting overseas from a remote location to kill innocent people, and who cannot be feasibly arrested or captured—is acceptable to many legal experts, the public is suspicious of executive power shrouded in secrecy.

“In the absence of an official picture of what our government is doing, and by what authority, many in the public fill the void by envisioning the worst. They see dark images of civilians and military national security personnel in the basement of the White House acting—as Senator Angus King put it—‘as judge, jury, and executioner.’”

Johnson said federal courts have been critical of the U.S. government’s contention that while drone strikes are legal, the Executive branch does not have to justify or explain why they are legal (or even admit that they exist).

In January, he said that U.S. District Judge Colleen McMahon, for instance, compared the government’s position in a Freedom of Information Request about the program to Alice In Wonderland.

According to Johnson, like the FISA court, a “drone court” might be criticized as a rubber stamp for targeted killings, he said. Judges might also resist being a part of the process, as they see courts as venues for resolving issues between parties, not as signers of death warrants based on classified submissions.

“Judges are accustomed to making legal determinations based on a defined settled set of facts, a picture that has already been painted. Not a moving target, which is what we are literally talking about.”

-Keeping targeted lethal force within the realm of the military and away from the CIA, where it is least controversial and on its strongest most traditional foundation.

-Institutionalizing the president’s own internal process of review to ensure the integrity of decision-making in this context.

Ultimately though, he cautioned that the final burden and responsibility for targeted killing will always be the President’s, under Article 2 of the U.S. Constitution.

“He may delegate it within his own chain of command, but he cannot assign a part of it away to another branch of government, nor have it taken away by an act of Congress,” he said. 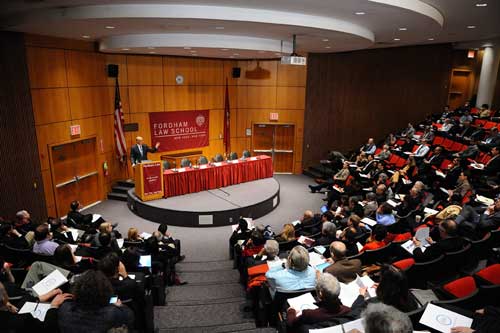