For many migrants from Syria, Iraq, Afghanistan, and other countries, the hope for safety and a better life in Europe outweighs the perils of a winter journey often taken on foot and by open boat.

Alexander van Tulleken, MD, the Helen Hamlyn Senior Fellow at Fordham’s Institute of International Humanitarian Affairs (IIHA), has seen firsthand the determination and also the suffering of those who have left behind everything they have ever known or had in order to seek a better future. 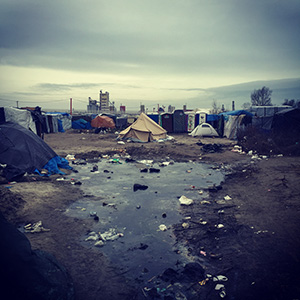 A refugee camp in Calais, France, is known as “The Jungle.” Photo by Alexander van Tulleken

With his twin brother Chris, who is also a doctor, Dr. van Tulleken spent two weeks in early January visiting camps, border crossings, and medical clinics to understand the conditions and medical problems the migrants face.

Their journey through Greece, Macedonia, Serbia, Germany, and France was documented by BBC1 television in a film titled Frontline Doctors: Winter Migrant Crisis, which aired in the UK earlier this month.

At a screening of the film at the Lincoln Center campus on March 15, Dr. van Tulleken recalled that though he’s worked in a number of humanitarian crises, this one hit him particularly hard.

“On multiple occasions I was reduced to tears. I think it was the most complicated and complex—the worst situation I’ve even seen,” he said.

As depicted in the film, the absence of large-scale government management—with the exception of Germany—has led to squalid conditions in some camps, exemplified by “The Jungle” of Calais, France, where migrants lacked basic hygiene, sanitation, or access to clean water.

Volunteers and charities have mainly shouldered the responsibility for humanitarian aid, as have medical organizations such as Doctors of the World and Doctors without Borders, both organizations whose members have treated numerous cases of frostbite, hypothermia, and respiratory and other serious illnesses.

Dr. van Tulleken acknowledges, however, that more needs to be done than just address the medical problems.

“It seems to me that we all do very badly in the world when we have a million people who are prevented from achieving their potential and when we have hundreds of thousands of children who can’t be educated,” he said.

“Real humanitarianism involves finding dignified ways of helping them to lead full, rich lives the way that we’d want to.”

In the film, Dr. van Tulleken speaks with a man in a registration camp in Greece who left for Europe with his wife and four children when he realized there was no longer any future for them in Syria.

His oldest child, 10-year-old Amna, recalls her life in Syria as filled with the constant fear of missile strikes. Later, breaking into a smile, she also expresses her hopes for an education in Germany and her dreams of becoming a doctor.

Despite terrible conditions and the closing of borders, waves of migrants continue to seek refuge in Europe, and Dr. van Tulleken believes acceptance and aid are the only humane responses.

“We have to find a way of letting large numbers of refugees and migrants into Europe and getting them jobs and housing and looked after. I don’t see any alternative,” he said.