skip to main content
Return to Fordham University
You are at:Home»Colleges and Schools»Graduate School of Arts and Sciences»Dear Mr. President: What Catholics Want Trump to Know

What would you say to President Donald Trump if given the opportunity to exchange a few words with him?

That was the question posed by J. Patrick Hornbeck, chair of the Department of Theology, to kick off “Dear Mr. President: Catholic Social Teaching, Civil Discourse, and the Trump Presidency,” a discussion presented by Fordham University’s Department of Theology and Office of Alumni Relations, featuring a distinguished panel of theologians, scholars, and journalists.

The question did not elicit a simple answer. 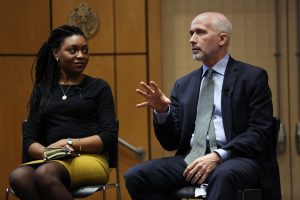 Father Massingale said that truth is essential in discussing the incoming policies of President Trump, who won 52 percent of the Catholic vote, according to a Pew national exit poll. Whether Catholics identify as liberals, conservatives, Democrats, or Republicans, civil discourse cannot exist without “a respect for the truth,” he said.

Imperatori-Lee noted that Catholic social teaching also requires a place in our national discourse to speak the truth; she said this has been a challenge in recent days.

“The relationship between the way in which our nation is being governed right now and Catholic social teaching seem to be two realities that almost cannot come into dialogue at this point,” she said.

Part of seeking and finding truth is accepting the realities of the election, said Emba, who believes that one of the most important questions facing Catholics today is “what do we do next?”

“I think that the pursuit of the human good was set aside during the election in favor of partisan discussions and anger, and [pursuing]that will be the work of the administration both in the first six days and going forward,” she said.

Father Massingale highlighted the dichotomy between law and morality, and how that has contributed to polarization both within and outside of the Catholic community. But Catholics still have a moral obligation to stand up for the poor, what is sacred, and their convictions, he said. 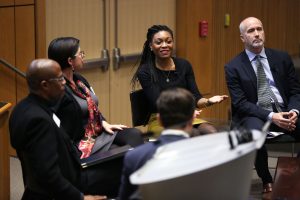 “Trump may have won the presidency, but that election did not un-elect my conscience,” he said.

Imperatori-Lee said that in the weeks ahead, Catholics may find themselves on the “periphery” but must protect vulnerable populations. “This is our deepest Catholic calling,” she said.

Some discussion focused on the visceral connection that many Catholics have to certain contentious issues. During the election, issues such as gay marriage and a woman’s right to choose took precedence over the totality of Catholic social teaching, which encompasses everything from the death penalty to economic and racial injustices, panelists said.

“I think that we as a church need to find a way to make all of those issues part of our identity, and also think about why we’re focusing on some and not particularly interested in talking about others,” said Emba.

Bringing all aspects of Catholic social teaching to the forefront requires a firm commitment to the Catholic tradition of civil disobedience, particularly against unjust laws, Father Massingale said.

“Civil disobedience is something that’s not only deeply American, it is also something that’s deeply Christian,” he said. “It’s founded on the basic conviction that human law is not absolute. Human law has legitimacy only when it is moral, and there’s a difference between legal legitimacy and moral legitimacy.”

As the discussion came to an end, the panelists were asked to share their vision for the future as the country prepares for the next four years under Trump’s administration.

“What I just keep saying to people is that the reason that Trump is president is because people voted for him,” said Gibson, who encouraged the audience to become proactive during a Trump presidency. He later continued, “Our problem is we’re partisan. We need to be political, and that means we work with people who disagree with us.”