skip to main content
Return to Fordham University
You are at:Home»Inside Fordham»Changes In Media Landscape Reflected in New Edition of Professor’s Book 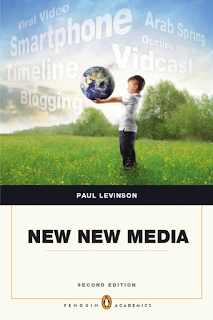 Three years is shorter than a single presidential term, but in the realm of online media, it may as well be a lifetime.

The second edition of New New Media, reflects a myriad of changes that have taken place since 2009, including the events of the “Arab Spring,” which took place just as the first edition was going to press.

“Obviously things didn’t work out all that well for the protestors in Iran, but the use of Twitter, Facebook, and Youtube to foment revolution picked up in other parts of the Middle East,” he said.

“So the single biggest item in the New New Media second edition is the Arab Spring and the revolutions in Tunisia, Egypt, Libya, and Syria. Each one is different, but social media has played a significant role in all of them.”

The role of social media in United States politics also figures prominently in the book, as Levinson notes that Republicans have caught up to Democrats in their deployment of resources in this area since the 2008 presidential elections.

When it comes to new developments, Levinson devotes space to Foursquare, which barely existed in 2009, and Pinterest, the fastest growing social medium of 2011.

Conversely, he notes that MySpace has shrunk from 300 million to 30 million users, and Digg.com, which was hugely influential in the 2008 election, has likewise faded from view.

As much as things have changed, Levinson said his assumptions about “new new media” have not, and in fact recent developments have confirmed them even more. He’ll continue to update the book, which geared toward both students and a general audience, every three years.

“The central thesis that I explored in the first edition was, what new new media do is they allow consumers to become creators or producers. So you can see on Youtube videos that are professionally produced for television, but some of the most viewed videos are made by people who have no professional standing at all,” he said.

“That’s more the case than it was four or five years ago. This has an impact on all aspects of our lives.”