skip to main content
Return to Fordham University
You are at:Home»Colleges and Schools»Graduate School of Religion and Religious Education»Truth About Mary Magdalene Could Open Doors for Women in the Church, Scholar Says

For centuries, Mary Magdalene has been portrayed within the Christian faith as a former prostitute who repented her sins and became one of Jesus’ most dedicated followers.

(Above) A sculpted relief by artist Margaret Beaudette, SC, depicts Mary Magdalene proclaiming “The First Easter Homily.” Image courtesy of Rita Houlihan.
In fact, Mary of Magdala was one of Jesus’ most influential apostles—and she was not a prostitute, said Distinguished Professor of Theology Elizabeth Johnson, CSJ, at Fordham’s Lincoln Center campus on April 14. Mary kept vigil at the cross throughout Jesus’ crucifixion, discovered the empty tomb after Jesus’ resurrection, and was then commissioned to “go and tell” the good news.

However, in the year 591, Pope Gregory I mistakenly characterized Mary Magdalene as a repentant prostitute, a characteristic which has overshadowed all her important apostolic acts ever since.

“Making her a prostitute has allowed her leadership role among the disciples to be generally forgotten,” said Sister Johnson, adding that the Pope’s error also allowed prostitution in general to become framed as “an evil expression of female lust” rather than exploitation of women’s bodies. 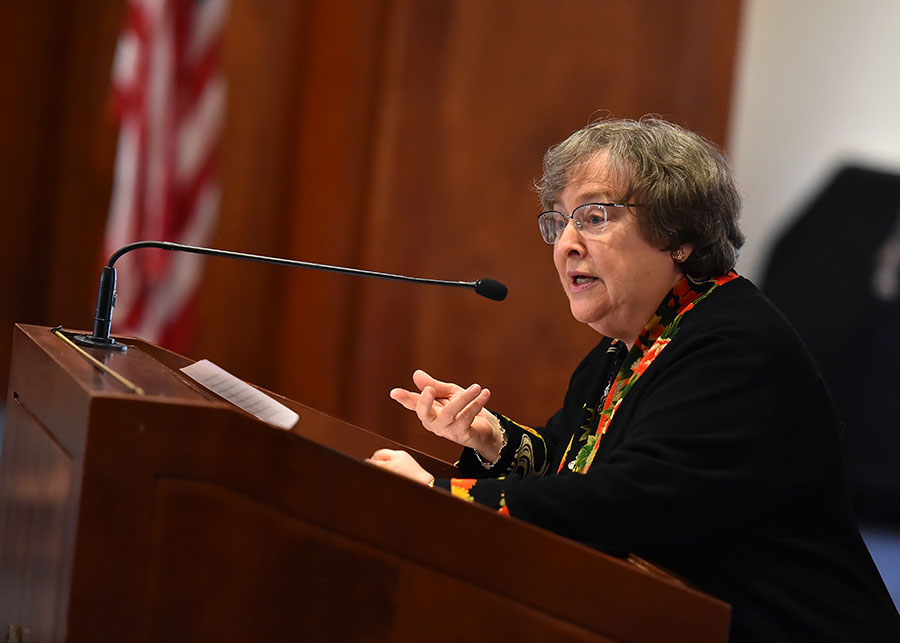 Even now, more than a millennium later, “for those who prefer a Church with an exclusively male hierarchy, it is easier to deal with her as a repentant sinner than as an apostolic woman who had a voice and used it,” Sister Johnson said.

Telling the true story of Mary Magdalene can not only vindicate her from eons of baseless rumors, but—more importantly—also reclaim the role of women in the Christian Church, Sister Johnson said.

First, though, she said we need to understand who Mary of Magdala really was.

Who was Mary Magdalene?

According to the Bible, Mary was among a group of women who followed Jesus and his disciples and “provided for them out of their resources,” which indicates that she was a woman of means, Sister Johnson said. She was most likely an independent woman, because she is identified by her town of origin rather than as the wife or daughter of a particular man.

It is also clear that Mary Magdalene held one of the most important roles among the disciples—she is always named first when the women disciples are listed and she was the first to see the resurrected Jesus.

“The risen Christ could’ve picked anyone he wanted to communicate the groundbreaking news of his resurrection—and he chose this woman. What should this tell us about Jesus’ trust in her?” Sister Johnson said.

Viewing Mary Magdalene in this light has prompted theologians to return to scripture and uncover evidence within the text of other women who made contributions to early Christianity. This, Sister Johnson said, can open up myriad possibilities for women in the Church today.

“The way we decide to tell her story can become impetus for reclaiming the abilities of women,” she said. “In rendering her visible, women also become visible.”

Sister Johnson will give the lecture a second time on April 21 at 6 p.m. in Tognino Hall at the Rose Hill campus.

The event was sponsored by Rita Houlihan and the Graduate School of Religion and Religious Education, with support from the Francis and Ann Curran Center for American Catholic Studies.