skip to main content
Return to Fordham University
You are at:Home»Living the Mission»Society of Jesus Ordains 4 New Priests in Ceremony at Rose Hill
Photos by Michael Trerotola
Members of the USA East Province of the Society of Jesus gathered at Fordham on June 12 to celebrate the ordination of four new priests in a ceremony held at the University Church.

The ceremony was presided over by the Most Reverend James Massa, auxiliary bishop in the Diocese of Brooklyn, as well as Joseph M. O’Keefe, S.J., GSAS ’80, a former faculty member at Fordham who was elevated to the position of provincial of the USA East Province in 2019.

In his homily, Bishop Massa noted that the ordination was taking place just a month after the Society of Jesus celebrated the 500th anniversary of its founding by Saint Ignatius of Loyola.

He addressed the four priests after they’d taken their promise of obedience, shortly before inviting them to lay prostrate on the floor of the church for the Litany of the Saints ceremony. 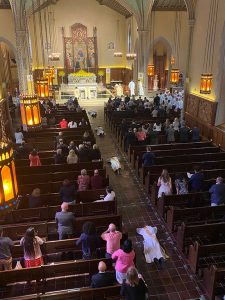 During the Litany of the Saints ceremony, the four priests being ordained lay face down on the floor of the University Church.

“Today in the ordination Mass, Ignatius and his companions from those early years accompany you to the altar. As you lay prostrate on the floor in a few moments, I invite you to listen carefully for their names, and for those of Mary, the Mother of God, and Saint Joseph, and the others invoked in the Litany of the Saints,” he said.

“This invisible company of holy men and women hover about you in the act of your submission and join all of us in calling down the Holy Spirit to impart to you the grace of Christ’s priesthood.”

“The care, the prayer, and the attentiveness to our four brothers who have been ordained has just been extraordinary,” he said.

Daniel N. Gustafson, S.J., was born and raised in Sioux Falls, South Dakota. He attended Georgetown University, and after interning in the U.S. House of Representatives and a political consulting firm, concluded God was calling him in a different direction.

He entered the novitiate after graduating with a degree in government and theology in 2011. During his novitiate, he served as a grade school tutor and hospital chaplain in Syracuse, New York; an orphanage volunteer in Bolivia; a nurse’s aide in the Bronx; and a religion teacher and campus minister in Philadelphia. He completed philosophy studies at Loyola University Chicago and spent two years of regency at Fordham Prep, where he taught religion, assisted with retreats, coached tennis, and accompanied students on immersion trips to Rome and Rwanda.

He completed his Master of Divinity degree and the coursework for a License in Sacred Theology (STL) at the Boston College School of Theology and Ministry. He will complete his thesis on church history for the STL this fall while ministering at St. Ignatius Parish in Manhattan.

Michael Lamanna, S.J., was born in Albany, New York, and attended Syracuse University for two years before entering the Society of Jesus as a novice, in 2011. As a novice, Lamanna taught at Nativity Miguel Middle School in Buffalo. After his vows in 2013, Michael was missioned to Loyola University Chicago for philosophy studies. He went to Yap, Micronesia, in 2016 for his regency, where he taught math, history, and religion at Yap Catholic High School.

Working with migrants and refugees has been a formative part of Lamanna’s life. He worked in refugee resettlement in Syracuse before he entered the Jesuits, and he has lived and worked near the Southwestern border as a Jesuit, including a summer working with the Kino Border Initiative. He most recently served as a deacon at St. Ignatius Parish in Chestnut Hill, Massachusetts, and completed a Master of Divinity and Licentiate in Sacred Theology at the Boston College School of Theology and Ministry. He will do a pastoral year at Sacred Heart Parish in Richmond, Virginia.

Zachariah F. Presutti, S.J., was born and raised in Belmont, New York. After four years of serving as the pastoral associate at St. Paul’s Church in Kenmore, New York, he joined St. Andrew’s Hall Novitiate in Syracuse, New York, where he did apostolic work in the local jail and supported victims of domestic violence and sexual abuse in an emergency shelter.

He obtained a master’s degree in clinical social work at Saint Louis University while interning at the local state correctional facility, where he offered individual and group therapeutic interventions to men detained in solitary confinement. After graduating, he founded the Thrive for Life Prison Project, a partnership between Jesuit parish communities and alumni of Jesuit schools that trains spiritual mentors to offer reflective and meditative resources at correctional facilities in the New York metropolitan area. He also supervised the opening of the Ignacio House of Studies in the Bronx, a transitional supportive living community for formerly incarcerated students.

He earned a Master of Divinity at the Jesuit School of Theology of Santa Clara University, and before the pandemic, he was offering weekly individual and group pastoral counseling at San Quentin State Prison. His work now will include offering sacramental ministry at the Church of St. Francis Xavier in Manhattan and at correctional facilities in the New York metropolitan area.

William C. Woody, S.J., was born and raised in Bryn Mawr, Pennsylvania. After attending St. Joseph’s Preparatory School in Philadelphia, he graduated summa cum laude from the University of Scranton with a Bachelor of Arts in theology, philosophy, and French and a concentration in Catholic Studies. As a novice, he ministered as a hospice orderly at Calvary Hospital in the Bronx, as a teacher in Syracuse, and at St. Anne’s Parish in Kingston, Jamaica. He returned to New York to earn a master’s from Fordham’s Graduate School of Arts and Sciences in 2015 and serve as a chaplain at St. Barnabas Hospital. He taught philosophy at Saint Peter’s University in Jersey City, New Jersey, before teaching philosophy at the College of the Holy Cross in Worcester, Massachusetts.

He said that a highlight of his scholastic ministry was teaching in the Montserrat Program at the College of the Holy Cross and directing adaptations of the Spiritual Exercises. He has published on contemporary philosophy of religion and serves as an editor for the International Network of Philosophy of Religion. He completed a Master of Divinity degree and a Licentiate in Sacred Theology at Boston College and will serve for a year at Holy Trinity Parish in Washington, D.C.