skip to main content
Return to Fordham University
You are at:Home»Living the Mission»Professor Mines Rich, Complex Life of Flannery O’Connor in New Books

After teaching students the writings of Flannery O’Connor for three decades, Angela Alaimo O’Donnell, Ph.D., felt that she knew her so well, she could write poems in O’Connor’s voice. She wrote her first one, “Flannery Rising,” in 2016.

One year later, O’Donnell, the associate director of the Curran Center for American Catholic Studies, also began working on a book-length study of race in the writings of O’Connor, whose estate formally endowed the center with a grant in 2017 to sponsor programming exploring the work of the famously reclusive author. 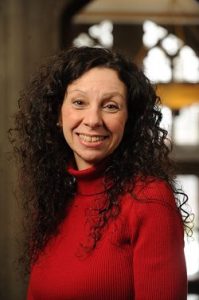 “It was kind of great, because I was getting to use two sides of my brain. There was the analytical side, which was doing research and writing about O’Connor in the context of the history of the time she was living in during the Civil Rights movement and analyzing her letters and her stories,” she said.

“I was also writing these poems, which were an imaginative enterprise in which I would channel O’Connor’s voice, enter into her consciousness, and have a conversation with her about things that mattered. They’re entirely fictional, but at the same time, I think they get at some essential truths about things that O’Connor believed.”

Although O’Connor is celebrated for short stories that she wrote in the 1950s and 1960s, such as those in the compilation Everything That Rises Must Converge (Farrar, Straus and Giroux, 1965), she was a complicated figure whose attitudes toward African Americans were sometimes problematic.

O’Donnell addressed the issue in her critical biography Fiction Fired by Faith: The Life & Work of Flannery O’Connor (Liturgical Press, 2015), but ultimately felt she needed to dive deeper. For Radical Ambivalence, O’Connor’s estate enabled her to do just that, by allowing her to quote from archival letters that have previously been off-limits to the public.

When she sat down to read them, O’Donnell had already written three-quarters of the roughly 100 sonnets she penned for Andalusian Hours. Reading the letters changed the course of the rest of that volume; the later ones were darker, she said. 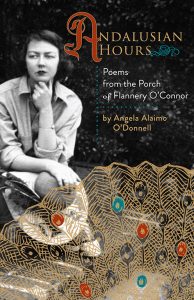 “I knew that O’Connor wrote some things that were unsavory, but actually reading them was nonetheless surprising and disturbing,” she said.

“I had to deal with that new understanding of O’Connor at the same time that I was writing these poems, which were much more playful, and not engaged in social issues. They were about things like her work, theological questions, her falling in love, her not getting along with her mother—everyday things about her life.”

“Radical ambivalence,” she said, is how she sums up O’Connor’s attitudes toward African Americans, who she wrote about, but never from their point of view. That was a conscious decision, O’Donnell said, as there was at the time no opportunity for whites such as herself to engage with black and brown people in a normal, natural way. Rather, relationships were governed by an elaborate code in which they spoke with each other in very formal, reserved ways.

“O’Connor often said, ‘I can’t write about characters who are African American, because I don’t understand them. Segregation is segregation,’” O’Donnell said.

“She understands her limitations, so she sticks to those limitations and works within them as well as possible.”

O’Donnell says there are important caveats to keep in mind when reading the letters, not the least of which is that many were written to friends and were therefore much more informal than published stories.

One of those correspondents, a friend born and raised in the South who’d moved to New York City and embraced progressive values such as racial integration. The two played a game where O’Connor would exaggerate and tell racially charged jokes, because she knew they would get a rise out of her friend.

“Reading these letters as a Flannery O’Connor fan, it’s very troubling. She’s very good at telling the jokes; she enjoys them, you can tell. She has a wicked sense of humor,” said O’Donnell.

O’Connor was also surrounded by family and friends who routinely used the N-word, and O’Donnell noted that for a writer whose Catholic faith was a driving force, it’s also noteworthy that she attended a racist church as well. In this area, O’Donnell said she drew inspiration for her book from the work of African-American theologians, including the writings of Bryan Massingale, S.T.D., the James and Nancy Buckman Chair in Applied Christian Ethics at Fordham. 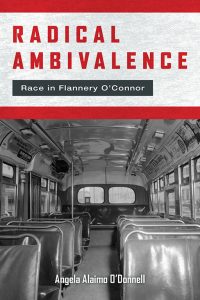 “She never received communion from the hands of a black priest, she was never taught by a black nun, and she never worshipped in church with black people. She had no example set for her by her church of how black people ought to be thought about and received into the church,” she said.

In the end, the opportunity for O’Connor’s thinking on the subject of race to evolve was cut short, as she died from lupus one month after the passage of the Civil Rights Act of 1964.

“I’m quite convinced that had she lived past the age of 39, she would have changed her mind and her ways of thinking about the relationship between the races and integration,” O’Donnell said, noting that even George Wallace, the staunchly racist former governor of Alabama, saw the error of his ways at the end of his life.

If Radical Ambivalence is scholarly, Andalusian Hours is theatrical. Each sonnet is prefaced by an epigraph featuring an excerpt from O’Connor’s writing. The poems are chronological, making for an autobiography in verse, written by someone else. Only the final sonnet, “Poem’s Apology,” is written in O’Donnell’s voice, and in it, she writes, “Forgive me for these brief trespasses on your private mind.”

“More than one person has asked me, ‘Don’t you think this is presumptuous of you, to pretend to know the thoughts and words of Flannery O’Connor?’ And my response is, ‘Yes, absolutely, but this is what artists do,’” she said.

“We put ourselves in the position of other human beings and try to imagine who they are and try to clothe their thoughts with words. We’re compelled to do it because we love these people and we want to bring them, with all of their virtues and all of their flaws, to life.”