skip to main content
Return to Fordham University
You are at:Home»Campus Life»President’s Message | Tragedy in Orlando 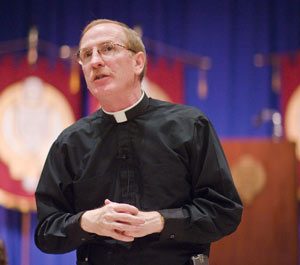 Dear Members of the Fordham Family,

The vicious and senseless shooting in Orlando on Sunday morning stunned and saddened the entire country, and indeed the whole world. ‎ Although terror attacks and incidents of mass murder have sadly become all too common in the course of the past two decades, Sunday’s incident was particularly unnerving and frightening because it targeted the LGBT community.  In the aftermath of the incident, which left 50 dead and scores injured, the world community has united both in condemning the attack and in expressing support for the LGBT and Latino communities–both in Florida and around the country.

As a Jesuit university (and hence a university whose entire life and mission is inspired by the Gospel and its challenge to live in love), Fordham joins people of good will around the world in ‎condemning the Orlando attack. In addition, however (and precisely because of our Jesuit identity), the University offers its heartfelt support to the LGBT and Latino communities both on campus and throughout the country. It also offers its equally heartfelt prayers to the families and friends of those who died so senselessly on Sunday morning.

This is a time for the whole Fordham family to come together, to pray for healing, and to stand in solidarity with people of good will everywhere.