Father McShane told guests the wintry mix was no match against the spirit of New York City.

“The weather is not cooperating as we kick off the Christmas season, but the city certainly is. The city is sparkling already—and filled with the sounds of the season. Choirs are turning up everywhere,” he said, noting that Fordham’s own choir is preparing for the annual Festival of Lessons and Carols.

“This evening we find ourselves … looking backward and forward at the same moment. Looking backward at all the blessings and graces that God poured into our lives in the course of a year that is now winding down, and at the same time we’re looking forward to all the graces and blessings that lie in store for us at Christmas and throughout the new year.”

At Fordham, he said, the past year has given us much to be thankful for, including the completion of Faith & Hope | The Campaign for Financial Aid. That financial aid “allows us to keep faith with the promise of our founding founder, Archbishop Hughes, and his vision, and it enables us to spark revolutions of hope in the hearts and lives of the students who come to us,” he said to the room filled with donors and supporters. “You made it happen.”

Looking to the future, Father McShane invited guests to be a part of the University’s next campaign, now in the quiet phase, that will be focused on enhancing the student experience at Fordham. The centerpiece of the campaign, he said, is a major expansion of the McGinley Center on the Rose Hill campus, adding that it will be a campaign for $300 million over five years. “And with this campaign, we will drive the amount of money that we’ve raised over the last 16 years above the billion-dollar mark,” he said. 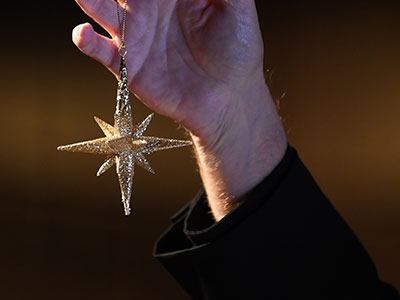 Reflecting on the Christmases of his childhood, Father McShane shared a custom of his home parish. The pastor would ask families to take home a bit of straw from the nativity scene surrounding the crèche—or as he corrected, the crib. “We were New Yorkers,” he said. “We didn’t have crèches, we had cribs.” The mothers of the parish had responded to his invitation by taking off their Christmas corsages and leaving them before the Baby Jesus in place of the straw they took, he said. “It was a holy exchange of gifts.”

“And so tonight, as we celebrate the beginning of the Christmas season, I want you to take home a bit of Fordham’s Christmas. I don’t have straw, but I do have this, this golden star,” he said, holding up an ornament that was given to each guest. “Whenever you look at it, see in it two things: Fordham’s gratitude to you, who make every day Christmas through your generosity, and also, see in it the light that shines in the heart of all that Fordham does, the light that is derived from a love of God and manifest in his son, who comes to us on Christmas.”