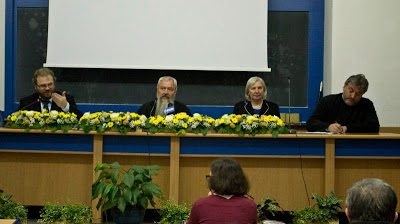 Members of Fordham’s Orthodox Christian Studies Center joined the world’s leading Orthodox scholars at an international conference held May 23 to 26 at the University of Babes-Bolyai in Cluj-Napoca, Romania.

The conference, “Can Orthodox Theology Be Contextual? Concrete Approaches from the Orthodox Tradition,” featured dozens of theologians and Orthodox scholars from around the world. Co-sponsored by the Orthodox Christian Studies Center, the conference examined the present challenges facing Orthodox theology and the future of its patristic heritage.

“Orthodoxy has a message, but it is still missing the language,” said Radu Preda, Th.D., director of the Romanian Institute for Inter-Orthodox, Inter-Confessional, and Inter-Religious Studies, located in Cluj-Napoca. Preda offered an introduction to the conference. “In order to learn it, Orthodoxy has to realize profoundly the problematics and expectations of modernity.” 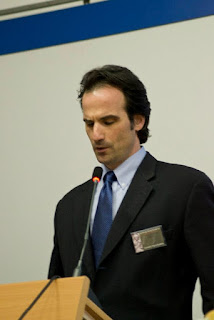 Aristotle Papanikolaou presents at an international gathering of Orthodox scholars in Cluj-Napoca, Romania.

Papanikolaou’s talk, “Personhood, Virtue, and War,” proposed an Orthodox theology of personhood that drew on St. Maximus the Confessor’s description of virtue as learning how to love, focusing especially on how this theory pertains to the ethics of war.

Gschwandtner argued in her presentation that philosophy serves an important purpose in the Orthodox tradition. She suggested that philosophy—especially the hermeneutics and phenomenology of contemporary French philosophy—could provide tools for theological thinking and thus assist contemporary Orthodox theology as it finds its place in the postmodern world.

The conference was organized by the Volos Academy for Theological Studies, Greece, and, in addition to Fordham, was co-sponsored by: