On April 22, noted Jesuit writer James Martin, S.J., and distinguished Fordham University theologian Sister Elizabeth Johnson, C.S.J., engaged a group of alumni in an inspiring conversation to mark the publication of Father Martin’s new book,Jesus: A Pilgrimage (HarperOne, 2014). For the event, members of the audience submitted questions, but due to the great number of questions, not all of them could be answered that evening. Father Martin has kindly answered some of those questions for us: 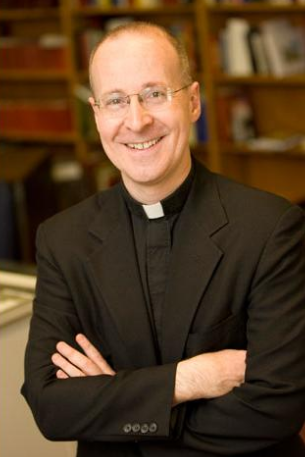 You and Sr. Johnson spoke about how the Church is the reliquary of Christ and how we are to be the light of Christ today, but my question is: How are scientists, or college-level biology students, able to embody the light of Christ wherever we go?
First of all, it’s important to remember, as almost everyone knows by now, that faith and reason are not inconsistent, and nor are science and religion. (In fact one of the great definitions of theology is St. Anselm’s “Faith seeking understanding.”) Scientists, and college-level biology students, can embody light of Christ much as anyone can–that is, by being good Christians.

But, more specifically, they might advance the message of Christ by reminding people, through their words and works, that the scientist can be a believer. Here I think of friends like Guy Consolmagno, S.J., and George Coyne, S.J., both astrophysicists who have worked at the Vatican Observatory. In their work, these two Jesuits often try to explain things like the Big Bang, creation, and astronomy from the vantage point of a believer. So anything one can do to rebut these notions that you cannot be a believer in the sciences is helpful.

In your historical scholarship do you believe that Jesus had brothers and sisters?
That’s a good question! During my theology studies and graduate school, Father Daniel J. Harrington, S.J., was once asked whether that really meant “cousins.” No, said Father Harrington, there is a perfectly good Greek word in the New Testament for “cousins,” and the Gospels do not use it here. Catholic belief of course is that Mary was a perpetual virgin, and therefore had no other children after Jesus. For other denominations her having other children does not prove as much of a theological problem.

One way I like to think about it that these children (indeed “brothers” and “sisters” in Greek, not cousins) were children from a prior marriage of Joseph. At the time, it was probably more likely that Joseph was older than Mary, and so he could have been married before. To me it’s more important to remember that Jesus had close relations with his extended family. We often think of Jesus as living almost in a vacuum, or interacting simply with Mary and Joseph. So the emphasis on “brothers and sisters” while hard to grasp, is nonetheless important.

If it is true that the Catholic Church is not gaining members, how do books like your Jesus and Sister Beth’s books get to folks who need them or could help them understand that Jesus was a really great man who was raised up and needs them to stay and fight for their Church—stay and reform?
Actually, the Catholic Church is gaining members. Overall the numbers are down but each year at the Easter Vigil people are baptized! My hope is that my book on Jesus will introduce people to the Son of God in a way that this is inviting and accessible, and in a way that shows that he wasn’t just a really great man, as you rightly say, but also desires a personal relationship with them. That’s part of what I try to remind people of by combining “Jesus of history” and the “Christ of faith.” The “Jesus of history” is indeed a really great man, as anyone can see. But it’s more than that. Because the “Christ of faith” is the one who, risen and alive, invites them into their church. And desires a relationship with them.

Elizabeth Johnson’s books, by the way, are also written at an inviting and accessible way. She’s helped countless people find their way to God, understand Jesus and appreciate Mary—including me. I can’t tell you how many times I’ve recommended Consider Jesus or Truly Our Sister.

When Jesus answers Mary, he says “my time has not come yet.” Doesn’t that show he knows his identity/mission?
That’s an excellent point. I hadn’t thought about it quite in that way before. But you could also make the counterargument that his time has in fact come, because afterwards he performs a miracle. So if you raise the question about whether or not his time has come or not, it seems the Mary may know before he does. My sense, and this is purely speculative, is that Mary may have had more time is meditate on his unique identity and mission than he did. So at the Wedding Feast of Cana, in the Gospel of John, Mary is inviting him to embrace his identity, fully, perhaps earlier than he had planned to.

How can we reconcile the time frame of the Gospels with accuracy? Have you read the book that treats Jesus as a zealot?
The timetable for the Gospels is sometimes difficult to pin down. For example, the Gospel of John shows Jesus making at least three pilgrimages to Jerusalem, whereas the Synoptics have him going once. And the Infancy Narratives in Luke and Matthew also diverge. In some Gospels, stories happen at different places in Jesus’s life. But, for the most part, the Gospels agree on the basic sequence of Jesus’s life, and in fact there are “Gospel Parallel” books that try to harmonize the timetable.

And yes, I’ve read most of the book that treats Jesus is a zealot, and it was an interesting book in its own right (though I doubt he was, technically, a “zealot”) but of course left out “Christ of faith,” which is a pretty big omission.

How would you interpret the post-resurrected Jesus in the historical and spiritual context that you describe?
This is what I try to do the book at length. The Risen Christ is sometimes described as “trans-historical” or “non-historical” by theologians, but it’s important to remember that he appeared to people in history. That is, he appeared to people in a particular time and in a particular place. So the risen Christ is in fact an historical reality.

Did Judas betray Jesus in the sense that Judas believed in Jesus as the political Messiah and believed that he would lead a revolt after the altercation in the Garden of Gethsemane?
The explanation you suggest is the one that makes the most sense to me. In my book, I sift through some of the proposed reasons for Judas’s betrayal. First, he was greedy — which doesn’t make a lot of sense if he’s traipsing around Judea and Galilee for all those years. Why would he lead such an itinerant, poor, mendicant life if he wanted to get rich fast? Second, “Satan entered into him.” That’s of course true, but what does that mean? One Scripture scholar told me it explains “either everything or nothing.” Third, Judas was just a terrible guy. But that makes little sense: Jesus was a good judge of character; presumably he wouldn’t have chosen someone who was irredeemably bad.

But the idea that Judas may have wanted Jesus to be the kind of Messiah that Judas expected makes sense to me. That is, only that particular explanation explains why Judas felt so dejected that he hung himself. Judas wanted to create God in his image rather than to allow God to create Judas in his image.

Jesus talked about “the Kingdom of God”—how do you understand the Kingdom of God?
That’s another significant part of my book. The kingdom of God, or reign of God (which is the better translation of the Greek, because it’s freed more from the confines of place), is difficult to understand. In effect Jesus made use of many parables and many stories to help people begin to understand what the reign was. But for the most part I think the reign of God is the world as God wants it to be, the world as it will be in the fullness of time, and the world as it is embodied in Jesus.

One of the best ways of understanding it is to see how the world was when Jesus was there. That is, when Jesus is in the world and encountering people, the sick are healed, storms are still, and the dead are raised. So I see the kingdom of God very much as embodied in Christ.

Which chapter was the hardest to write?
Actually, they were all enjoyable to write, but the one that perhaps took the most research was “Golgotha,” the chapter on Jesus’s death. I wanted to get that timetable precisely right, and also be careful to remind people that it was the Romans who killed him, not the Jews. Only Pontius Pilate, as the procurator of Judea, had the power to condemn someone to death. It was also difficult to write because of the subject material—it was hard not to be sad when writing it.

The most enjoyable chapter to write, though, was “Nazareth” where I try to re-create the world of first century Galilee. I could’ve written that forever — though I doubt anyone would’ve wanted to read a 300-page chapter!