skip to main content
Return to Fordham University
You are at:Home»In the News»It’s Not Every Millennium that a Jesuit Becomes Pope

“Shocked.” “An Ingenious Choice.” “What would St. Ignatius think?”

Members of Fordham’s Jesuit community were stunned, along with their Jesuit brethren around the globe, when one from their own order upended a long Vatican precedent to become the first Jesuit pope in the church’s history on March 13. 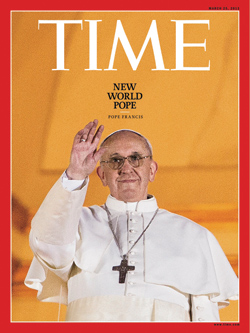 “The thing I find interesting is that he took the name Francis, most likely after Francis of Assisi,” said John J. Shea, S.J., director of campus ministry at the Lincoln Center campus. “He has lived a poor life, like Francis did, giving up his wealth. But moreover, Francis had a vision of Christ on the cross saying to him, ‘Rebuild my church.’ With so many problems now, that may be part of [Pope Francis’] mandate—to be like Francis of Assisi to ‘rebuild my church.’”

R. Bentley Anderson, S.J., associate professor of African and African American studies, said that Pope Francis would bring “an understanding of Ignatian discernment” which will serve him well in his new role.

Mark S. Mossa, S.J., a lecturer in theology, admitted that, as a Jesuit, he felt just a bit conflicted at coming to terms with the gap between the humility of St. Ignatius and the pomp normally associated with the pontiff.

“As a Jesuit, you have this spirituality in common with all the other Jesuits around the world, so when one of our Jesuits does something great and wonderful, we share in that,” he said. “[But] part of our charism, and the founding of the Society of Jesus, was St. Ignatius’ determination that Jesuits not be like other clerics, who he saw as sort of vying for positions of power and ambition for higher office.”

And yet, in his first appearance, Pope Francis made it clear that he bears much humility by eschewing formal accoutrements in favor of a simple white cassock and asking for his followers’ blessing, said Father Mossa.

Leaving the Conclave, there was a much-publicized moment when the new pope boarded the bus with other cardinals rather than opt to take a private car waiting for him.

“We [Jesuits] are used to a common life of community. We’re more accustomed to sharing,” said Joseph Lienhard, S.J., professor of theology. “Nobody here at Rose Hill owns a car, the community has some cars that we sign up to use.”

Even in describing the moment the new pope stepped out onto the Vatican balcony, Father Lienhard referred to it as a moment experienced communally.

I haven’t had time to process this personally,” he said. “After more than 50 years as a member of this order you think in terms of ‘us’ and ‘we.’”

The new pope also inspired the masses in St. Peter’s Square to pray silently, which is one of the Jesuits’ spiritual exercises.

“Silence is so important to our Jesuit tradition,” said Father Mossa. “[With] the Internet, the social media, it seems like there’s lots of noise out here. I think if [the pope]can bring a sense that the world needs silence too, that would be a wonderful contribution.”

Fordham’s President on the New Pontiff
Watch a video of Joseph M. McShane, S.J., speaking on CNN about the new pope here.