skip to main content
Return to Fordham University
You are at:Home»Living the Mission»Granddaughter of Dorothy Day Shares Personal Perspective in New Book
Kate Hennessy signs copies of her new book at a March 28 reading on the Rose Hill campus. Photos by Bruce Gilbert
Dorothy Day is known worldwide as a writer, activist, and co-founder of the Catholic Worker Movement, which has promoted peace, equality, and justice since its beginnings in the 1930s.

Since her death in 1980, many people have hoped to see Day canonized as a saint, recognizing her lifelong commitment to helping the poor, fighting for workers’ rights, and opposing war.

For Kate Hennessy, the youngest of Day’s nine grandchildren, Dorothy Day was indeed an inspiring figure of goodness. But she was also “Granny,” a very real person in her life.

A prolific writer herself, Hennessy has shed light on this personal side of her grandmother in a book titled Dorothy Day: The World Will Be Saved by Beauty (Scribner, 2017). 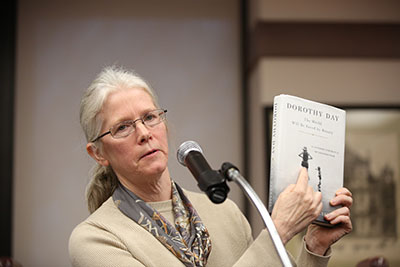 She shared her recollections of Day with the Fordham community in a reading and book signing on March 28 at the Rose Hill campus. The portrait she presented was of a woman who continually gave of what she had to others.

“My grandmother was extraordinarily non-material,” she said. “People were always giving her gifts and she would immediately hand them off to someone else. It was just a kind of instinctive gesture.”

Before a capacity audience, Hennessy said she was motivated to write the book to help people understand Day as a mother, grandmother, and a member of both her own family and the Catholic Worker family.

“If we lose that part of her story it would really be a tragedy. It puts her in the context of a whole human life and doesn’t elevate her or simplify her,” she said.

For Hennessy, the book is as much a portrait of Day as it is a portrait of Hennessy’s mother, Tamar, who played an integral role in the course of Day’s life.

“After all,” she said, “it was the conception of my mother that started my grandmother on her path of Catholicism.” It had been Day’s joy in her pregnancy that had awakened her spiritual longing and her desire to have Tamar baptized. Soon after, Day joined the Catholic Church.

Though Hennessy portrayed her mother and grandmother as two very different women, she said they were ultimately bound by a profound love for each other and by a shared belief in one’s personal responsibility to care for others.

“Both of them deeply believed every single person has a vocation and it is so important to figure out what it is,” she said. “What are your skills? What do you have to give? Where are you drawn to?”

In reading from her book, Hennessy brought to life her teenage visits to see Day at Maryhouse, one of the Catholic Worker “houses of hospitality” that still operates on 3rd Street in Manhattan. She depicted a place of congenial activity and ringing phones, with Day at its center, peaceful in the simple room where she lived, surrounded by her beloved books.

Hennessy said she believes it’s important that each new generation reexamine the life of her grandmother for guidance in how we can respond to the continued problems of poverty, injustice, and hopelessness.

“I certainly wrote this book with every intention of trying to change people’s lives,” she said. “The story of Dorothy Day will change your life if you pay attention to it.”

For Roxanne De La Torre, the director of the Dorothy Day Center, learning more about Day’s life helps us to understand that “holiness, goodness, and discovering beauty through all of life’s ups and downs is all a part of this glorious mystery.”

“Hopefully our students can understand that it’s not out of their reach to live a good, blessed life—a life of vocation and direction,” she said.

Hennessy’s previous book, a collaboration with the photographer Vivian Cherry titled Dorothy Day and the Catholic Worker: The Miracle of Our Continuance, was published by Fordham University Press in 2016.