skip to main content
Return to Fordham University
You are at:Home»Colleges and Schools»Graduate School of Arts and Sciences»Forced to Leave After Ebola, Graduate Returns to Sierra Leone

Kathleen Frazier, GSAS ’15, had only been working in Sierra Leone for a week in 2014 when the Ebola virus began spreading throughout the country and in the neighboring West African countries of Guinea and Liberia. By the time the outbreak was finally contained two years later, an estimated 3,956 people had died, and another 8,706 were confirmed to have contracted the disease.

Frazier’s visit was cut short, as was her work with Timap for Justice, the country’s largest paralegal network. A former Peace Corps volunteer in Rwanda, Frazier had been helping develop organizational assessment tools and training materials, and observing paralegal activities in Timap’s various offices around the country.

For a year, Frazier worked remotely for Timap as best as she could from the United States. She graduated a year later with a master’s degree in economics and international political and economic development (IPED), and worked as an adjunct professor with Fordham’s Institute of International Humanitarian Affairs.

In October of 2016, she came back on a yearlong Fulbright scholarship to continue her work with Timap.

“When I was here last time [during the Ebola outbreak], it struck me how much of the epidemic’s consequences weren’t just going to be health-related. There were going to be many more systematic problems related to socioeconomic recovery and access to civil justice issues,” she said.

Her fellowship involves exploring new ways that the legal system can handle civil justice cases, particularly those of a commercial nature. When the Ebola epidemic was in full swing, a great deal of economic activity arose from responding to it. Now that it’s ended, Frazier said the time is right to explore avenues for these cases to be resolved.

“Do we look for cases that involve debt, breach of contract, or land tenure?  Or is it about the total amount of money involved in the claim? What does it look like to handle commercial cases in a way that could alleviate pressure from the legal system through alternative routes? That’s what we’re in the process of looking at,” she said.

Frazier splits her time between Timap’s offices in Freetown, where she writes proposals and reports, and in towns three to six hours away from the capital, where she visits local Timap paralegals and judicial officials to measure the demand for commercial alternative resolution services. Although she is learning Krio, the official language of the country, she still relies on an interpreter who can help her reach speakers of Mende, Temne, or any of the other 17 tongues spoken in the provinces.

Sierra Leone has a formal legal system based on the British Colonial common law that features courts, correctional centers, and police stations. It’s a dualist system though, so local chiefdoms also have a say in some matters, she said.

“As you can imagine, navigating that can get complicated for an ordinary Sierra Leone resident,” said Frazier.

“On top of that, the formal legal system is much more limited in terms physical facilities. The customary legal system has a far wider reach, but it has a slightly different scope. A lot of times, legal aid and access to justice services like Timap are a bridge between those two.”

The work is challenging, and Frazier admits she occasionally feels overwhelmed. But she’s inspired by the camaraderie and resolve that was borne of the efforts of those who worked together to stop the epidemic, as well as her colleagues at Timap.

“It’s very much a transition stage here right now, which I always find to be a fascinating time in a country,” she said. “But it’s very difficult for a lot of people.” 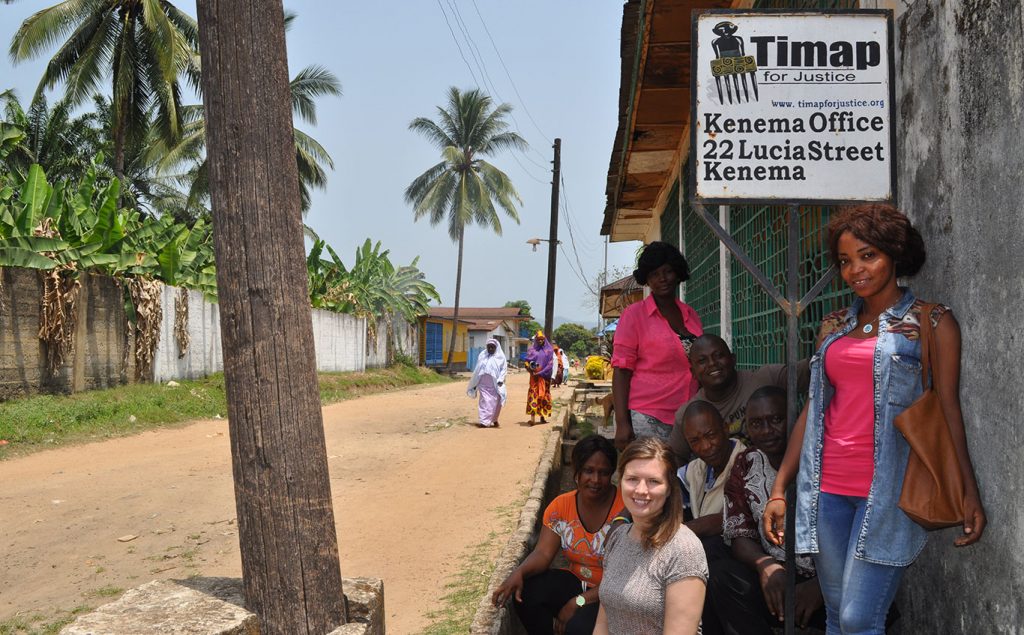 Frazier and members of Timap at the organization’s office in Kenema, Sierra Leone