skip to main content
Return to Fordham University
You are at:Home»Living the Mission»Fordham Mourns Jesuit and Longtime Professor of Philosophy 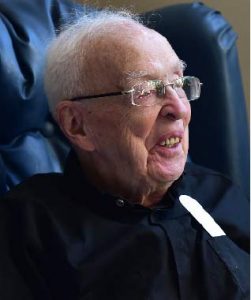 Joseph V. Dolan, SJ, 98, a presence on the Rose Hill campus for nearly four decades and the oldest member of the Northeast Province of the Society of Jesus and, died on April 30 at Murray-Weigel Hall.

Father Dolan, who was a priest for 62 years and a member of the Society of Jesus for 73, was born in 1917, and graduated from Regis High School in 1935. He graduated from Fordham College at Rose Hill in 1939 and entered the New York Province of the Jesuits at the Novitiate of St. Andrew-on-Hudson, Poughkeepsie, two years later.

The Mass of Christian Burial will be celebrated in the University Church on May 5 at 10:30 a.m., followed by burial at the Jesuit Cemetery in Auriesville, New York.

Father Dolan taught at Canisius High School in Buffalo, New York, before returning to Fordham, where he earned a master’s degree in philosophy from the Graduate School of Arts and Sciences in 1948. He was ordained to the priesthood at Woodstock College in 1952.

He began teaching philosophy at Canisius College in 1957, and also taught at St. Peter’s College. He returned to his alma mater in 1964 and was named Professor Emeritus of Philosophy in 1989.

For a brief time, Father Dolan taught philosophy at the Inter-Diocesan Seminary in Papua New Guinea in 1990, but again returned to Fordham, where he served in the Jesuit community as an assistant to the minister. From 1995-2009, he served as host and director of the Jesuit villa at Mitchell Farm in Mahopac, New York, and in 2012 he accepted his final assignment—to pray for the church and society at the Jesuit residence of Murray-Weigel Hall.

“Father Dolan was justifiably proud of his age as the oldest Jesuit of the Province. He was always ready to serve and assist; in the words of a friend, like a good wine he mellowed with age,” said Peter Schineller, SJ, archivist for the New York Province of the Society of Jesus.

“From the more serious and formal philosophy professor he became the gracious, generous, and faithful assistant in and beyond the Jesuit community. Always the priest, even in his 1990s he would drive daily to celebrate Mass at local parishes.”