skip to main content
Return to Fordham University
You are at:Home»Inside Fordham»Fordham Faculty Weigh in on Time’s ‘Person of the Year’ 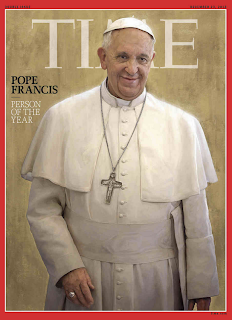 Time’s “Person of the Year” is Pope Francis.

As they wrote in their Dec. 11 announcement:

“He took the name of a humble saint and then called for a church of healing. The first non-European pope in 1,200 years is poised to transform a place that measures change by the century.”

Some members of the Fordham faculty shared their thoughts on the magazine’s pick of the compassionate Jesuit from Argentina.

“A year ago, very few would have suspected that the leader of the Catholic Church would become Time magazine’s ‘Person of the Year.’ Since his election on March 13, Pope Francis has mesmerized those inside and outside the Catholic world with his personal simplicity, commitment to the poor, and emphasis on the joy of the gospel. It is no surprise that they named him Person of the Year. What remains to be seen are the next steps that Pope Francis will take—the world will have to wait until 2014 to discover if substantive changes in Roman Catholic life and practice will follow upon what has certainly been a striking shift in tone at the highest levels of the Vatican.” – Patrick Hornbeck, Ph.D., chair of the theology department. Hornbeck was on Al Jazeera America recently discussing the Pope’s recent comments on capitalism.

“First and foremost, [Pope Francis] exemplifies a radical prioritization of the poor. In so doing, he combines prophetic modes of leadership with the traditional priestly ones. Pope Francis has shown that he prioritizes the concrete—each person—over an abstract principle. And he maintains the capacity to surprise everyone, even those closest to him. In all these ways, he imitates the most popular leader ever to have lived, Jesus.” – Michael Peppard, Ph.D., assistant professor of theology.

“It’s an honor that seems fitting for a pope who’s shaping up to be a game-changer when it comes to Catholicism’s place in the world today.” – James P. McCartin, Ph.D., associate professor and director of Fordham’s Center on Religion and Culture.

Being that Fordham is the “Jesuit University of New York,” we even had one of our Communications and Media Studies faculty members weigh in:

“Time’s choice sometimes involves a conflict between their criterion of choosing the individual who had the greatest pact on world events and the potential negative response of their readership. In 1979 they chose the Ayatollah Khomeini and lost subscribers and sales. In 2001 they decided against the obvious choice, Osama bin Laden, knowing how negative the reaction would be. The editors must truly be in heaven to have before them such a clear-cut candidate who is not only a very positive figure, but an exceptionally inspirational one, not to mention someone who transcends nationality and even religious affiliation.” – Lance Strate, Ph.D., professor of Communications and Media Studies.