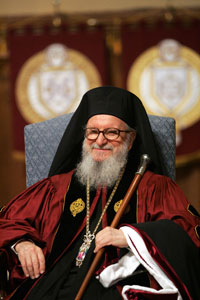 Fordham University awarded His Eminence Archbishop Demetrios, the primate of the Greek Orthodox Church in America, an honorary doctorate of humane letters, honoris causa, at a special ceremony on June 14 as part of Fordham’s Orthodoxy in America Lecture Series inaugural conference.

The honorary doctorate was conferred on the occasion of the 40th anniversary of the archbishop’s elevation to the episcopacy. In presenting the award at the University Church on the Rose Hill campus, Joseph M. McShane, S.J., president of Fordham, called the archbishop “a man of graciousness and transparent holiness.”

“The archbishop has worked tirelessly to heal the division that exists between the Eastern and Western churches,” Father McShane said. “He is a master teacher, a teacher who yearns for, and who builds, the Kingdom with his every word and his every deed.”

Since 1999, the archbishop has served as the spiritual leader of 1.5 million Greek Orthodox Christians in America. He was born in 1928 in Thessaloniki, Greece, and attended Harvard University, where he received his Ph.D. in philosophy in 1972. He received a doctorate in theology from the University of Athens in 1977.

The archbishop is the final recipient of a Fordham honorary degree this academic year. Seven others received honorary degrees at Fordham’s Commencement and diploma ceremonies in May.