skip to main content
Return to Fordham University
You are at:Home»Inside Fordham»Lectures and Events»Catholic Church Should Confront Racism and Misogyny, Says Scholar
Mary Shawn Copeland speaks to students, faculty, and other guests in Tognino Hall. Photos by Taylor Ha
“Race is one of the first things that we notice about people—along with their sex—when we meet them,” said Mary Shawn Copeland, Ph.D.

“The very racial stereotypes we profess to abhor infiltrate our encounters with bank tellers, nurses, taxi drivers, waiters, and the men who collect our refuse,” said Copeland, a systematic theology professor at Boston College. “We squirm to suppress reactions, to press down our preconceived notions about the white bank teller, the black male nurse, the Lebanese taxi driver, the Chinese waiter.”

But we are not born with these beliefs, said Copeland, who delivered Fordham’s 14th Annual Rita Cassella Jones Lecture on Oct. 9 in Tognino Hall. If we confront and deconstruct how race shapes and is shaped by social structure, she said, we can identify and support strategies to overcome what we have been taught.

The lecture, “An Atlas of Another and Difficult World: Gender, Race, and the Church,” was a reflection on how the church struggles to respond to the situations of many of its members—those who are shunned and scolded by other Catholics because of their racial or ethnic identity, among other reasons—and the state of human suffering in the church today.

Copeland, an award-winning writer who has written or edited six books and penned 125 pieces of literature related to religion, race, gender, and human suffering, asked the audience to consider several things. Among them: the lives of black and Latino people “at risk during even simple encounters with police officers,” and, in turn, fatal attacks against police officers; the hundreds of young people, almost all white men, “marching in the streets of Charlottesville, Virginia, spewing anti-Semitic, anti-immigrant, racist rhetoric;” and the white man who verbally threatened two African American women—one wearing Muslim garb—who were riding a train in Portland, Oregon, and then stabbed the three white men who tried to help the young women.

“A church ought to denounce this,” Copeland said. 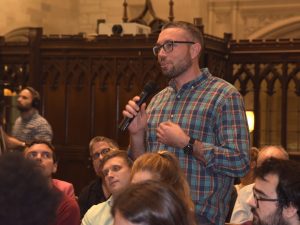 “I represent an institution that has hurt, and continues to hurt,” said a student, a first-year Jesuit scholastic, who asked Copeland for advice. One of the solutions, she said, was to “interrogate white privilege.”

Yet the church, for the most part, she said, has stayed silent. Here, she continued, is exactly where the church and its leaders have failed: They have not provided clear advice on problems like racial and social injustice, mass incarceration, and deportation. They do not give their incoming priests a solid education in the sociology of racism and the psychology of racial dynamics. They ignore politicians and members of the media who “intentionally have fostered distrust, animosity, and resentment against people of color.” And, particularly in this day and age, the church’s leaders have failed to forcefully condemn mistreatment against hundreds of people: immigrants, undocumented people, minorities, and women.

Things won’t change until the church publicly acknowledges and confesses its complicity in the roots of racism and denounces present-day discrimination, Copeland said.

“We cannot and must not live in ignorance of our past,” Copeland explained. “While we ourselves may not be guilty of the historical sins of genocide and slaveholding, we are accountable for the continuing and compounded structural injustices these sins have created.” 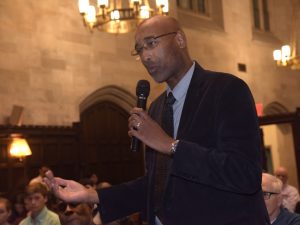 Mark L. Chapman, associate professor and associate chair in the African and African American Studies department, said he was deeply moved and empowered by Copeland’s presentation.

Our past sins live on today, she said. They “mutate and manifest” themselves everywhere: anti-immigrant sentiment, mass detention, racial segregation in residential housing, racial profiling, misogyny, and sexism. But, she said, if the church speaks up—and we, supported by love and solidarity, deeply reflect on the church’s current impasse—we can heal and create a future that leads toward the common good.

“We have to be awake,” she said. “What do the students—what do you call it, ‘Be woke?’” she asked the audience. There was some laughter, and a chorus of “yeah”s among the crowd. “Be woke,” Copeland repeated.