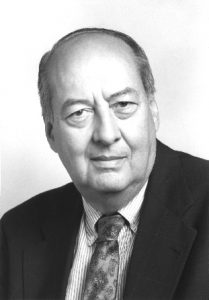 The Fordham Law community mourns the death of Distinguished University Professor Emeritus Joseph M. Perillo. Professor Perillo passed away on December 30, 2017. He was 84.

“Joe was a scholar of integrity; his conclusions always flowed from careful research and analysis,” said Law School Dean Matthew Diller. “In a soft-spoken and gentlemanly way, he was a tremendous intellectual force.”

The single-volume treatise written by Professor Perillo and the late Professor John D. Calamari, The Law of Contracts, is a seminal work in the field and has gone through seven editions; for years it was called Calamari and Perillo on Contracts.

He served as the School’s acting dean from 1981 to 1982, after Joseph McLaughlin resigned as dean to take a seat on the federal bench. In 1982, Professor Perillo received the Eugene J. Keefe Award from the Fordham Law student body. The following year he was made director of the Louis Stein Institute for Professional Responsibility and Leadership (today called the Louis Stein Center for Law and Ethics). In 1987, he was appointed to the Alpin J. Cameron Chair in Law. Ten years later he was selected as Fordham University’s first Distinguished Professor. He also served as founding director of the Fordham Belfast/Dublin Summer Program.

“Whenever and wherever I needed help, I turned to Joe during my two decades as dean, and he never said no,” said former Dean John Feerick LAW ’61. “There wasn’t anything he touched that he did not make better.”

Among his innumerable, influential scholarly articles, he published a piece in 1994 with the Fordham Law Review about the UNIDROIT principles of international commercial contracts. Professor Perillo also notably provided consultation to the National People’s Congress of China as it enacted its first contract law.

Professor Helen Bender LAW ’78 worked with Professor Perillo on multiple editions of the innovative casebook Cases and Problems on Contracts. “Joe was an unforgettable mentor, colleague, and friend,” Professor Bender said. “I feel very fortunate to have been able to work so closely with a scholar who was always generous in sharing his depth of knowledge with me and others.”

Professor Perillo also served as supervising editor of the revised edition of Corbin on Contracts, a 16-volume treatise that provides a comprehensive analysis of the rules of contract law.

Professor Perillo received an A.B. and J.D. from Cornell, where he served as the note editor of Cornell Law Quarterly. From 1960 to 1962, he studied at the University of Florence as a Fulbright scholar. His many honors included the inaugural lifetime achievement award from the International Conference on Contracts, which he received in 2008. After his retirement, Professor Perillo continued to study and work on contract issues.

He is survived by his wife, Diane, three children, Joe Paul, David, and Catherine, and seven grandchildren.

The Law School will be organizing a memorial service. The family has requested that donations in Professor Perillo’s memory be made to Doctors Without Borders or any animal rescue organization.