skip to main content
Return to Fordham University
You are at:Home»Inside Fordham»Henry Cobb and Yvonne Szeto: Architects of the New Law School

Today, a new 22-story law school and undergraduate residence hall, designed by Pei Cobb Freed & Partners, is visually vitalizing the association that until now existed in name only.

The new law school sings as part of an ensemble, complementing, but not mimicking the travertine stone palette of the Metropolitan Opera. Or, as a recent article in The New York Times described it: “Clad in precast concrete panels, metal, and glass, the building features a series of undulating arcs intended to make an engaging gesture toward Lincoln Center while providing a distinctive identity for the law school.” 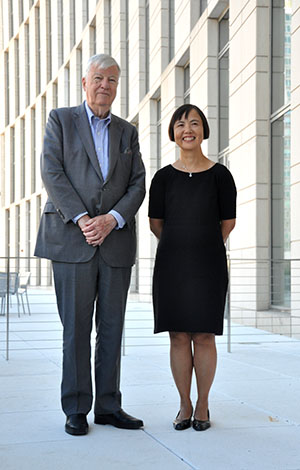 Henry Cobb collaborated on the design of the 468,000-square-foot building with design partner Yvonne Szeto. For Mr. Cobb, at 88 years of age, the completion of this project is a capstone for a year that has included receiving the gold medal in architecture from the American Academy of Arts and Letters. It is the largest academic building of his 65-year career.

“From the first visit that Yvonne and I made to the site, we were aware it was a very privileged location because we were creating a new face for Fordham toward Lincoln Center,” said Cobb.

The new building engages its surroundings on several levels. At street level, visitors can peer into a moot courtroom through a wall of windows. A student café enlivens the sidewalk. Just above, the building is set back, making space for a generous veranda. The floors of the law school continue up another eight stories behind a sinewy checkerboard façade of precast concrete panels and glass. Above are undergraduate student residences in a tower that reaches 22 stories, distinguished from the law school by a convex glass curtain wall which thrusts out toward the arts complex. To the south the tower maximizes sky exposure to the Moses Plaza by angling away from the park, while the law school’s lower register gently cups the green space to complete its cloister-like atmosphere. A grand stairway on 62nd Street invites the public in. At the top, the building aligns itself with the city’s grid by gesturing in an exact perpendicular to Broadway.

“It’s an acknowledgement of the intersecting grid of the city,” said Cobb. “I think it’s kind of wonderful that we were able find a way of acknowledging Broadway’s diagonal in this building and yet it’s up in the sky. It would have been inappropriate at street level, but up in the sky it’s powerful.”

Perhaps most unique to a congested city like New York, are the uninterrupted views of the building—something afforded by only a handful of sites in Manhattan.

“From the Lincoln Center plaza you can actually walk towards this building and see it in full view alongside the arches of the Met,” said Szeto.

The undulating curves of the building’s exterior work their way into motifs in the terrazzo floors, stainless steel elevators, and leaflike acoustic panels that drop down from the ceiling. Circular stairs join three sets of bi-level floors that include classrooms, the Maloney Library, and administrative and faculty offices. Atop it all, on the ninth floor, the Geraldine Ferraro Clinical Education Center houses a program that serves clients and trains students.

While architecture is an inherently collaborative profession, it’s usually the man at the top who gets all the credit—and it is usually a man. In this case, Cobb said he was very much “aware of how Yvonne’s sensibility has changed my way of thinking over the years.

“I don’t want to get specific, but it has to do with certain ways of thinking about form that are natural to her and not natural to me, which I appreciate.”

Szeto downplays the role of gender in the school’s design.

“I think our responses come from the site, and the specifics of the program of the client. So I don’t think its necessarily ever masculine or feminine. It’s just a natural synthesis of an outcome.”