skip to main content
Return to Fordham University
You are at:Home»Law»A Discussion of the Historic Attica Uprising
Above, Soffiyah Elijah and Heather Ann Thompson
On the outskirts of the quaint town of Attica, New York, a prison stood silently, masking the horrific conditions that prisoners endured within its walls. Nearly 2,400 prisoners, who were mostly men of color from poor and urban backgrounds, were fed 63 cents’ worth of food and given only one square of toilet paper per day. They were denied not only showers but also, if they were not married, visitation rights with their children.

But the men were reading about civil rights movements beyond the prison’s walls. They were reading about George Jackson, the African-American activist and author who attempted escape from a California prison and was killed. The men wrote letters, too, and they were hurt that the government ignored their cries for help. On Sept. 9, 1971, they took control of the prison, and for four days they attempted to negotiate better conditions. 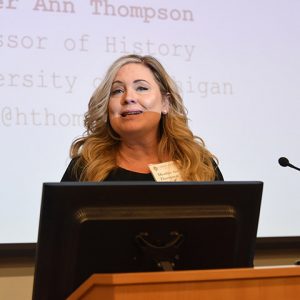 On Nov. 1, Fordham welcomed Heather Ann Thompson, who spoke about her book Blood in the Water: The Attica Prison Uprising of 1971 and Its Legacy, which won the 2017 Pulitzer Prize for history. Thompson and a panel of legal experts and civil rights champions discussed how the legal system responded to the uprising and how the uprising illuminates current incarceration issues. The event, part of the A2J Initiative at Fordham Law, was hosted by the School’s Stein Scholars, Stein Center for Law and Ethics, and Center for Race, Law and Justice. Fordham Law Dean Matthew Diller was inspired to organize the event after reading Thompson’s book. “It spoke to me in so many ways that I thought, we must have Heather Thompson at our school,” he said.

“Out of this completely chaotic and unpredictable moment comes, I would argue, one of the most extraordinary human rights stories in American history,” said Thompson, who is also a professor of history, Afroamerican and African studies, and social theory and practice at the University of Michigan.

The state’s response to the uprising was inhumane. Troopers and correction officers were sent across the state to the prison, and, Thompson explained, weapons were passed out to them like candy. They wanted Governor Rockefeller to come to the prison and persuade the men to surrender without legal or physical ramifications. Rockefeller, however, had no intention of visiting and had every intention of taking the prison by force. The troopers and officers dropped gas over the prison and, once the men inside could not stand, they stormed into the building and began shooting.

In the aftermath of the chaos, the state chose not to tell the truth, Thompson said. Government officials pinned the blame on the prisoners, prosecuting them and persecuting them via public media.

Eventually, due to pressure from civil rights activists and attorneys, the prisoners achieved some victory: The state, Thompson explained, ultimately appealed an important jury verdict on behalf of the prisoners. It was “the closest to justice that could probably be had,” she said. She revealed, however, that the public still doesn’t know half the story, as the government continues to hide key documents about the historic event.

Following her talk, Thompson joined a panel discussion Soffiyah Elijah, executive director of Alliance Families for Justice; Elizabeth A. Gaynes, president and CEO of the Osborne Association; and William Hellerstein, professor of law emeritus at Brooklyn Law School. The panel was moderated by Caroline Hsu ’09, a Stein Scholars alumna who is now staff attorney at the Legal Aid Society’s Prisoners’ Rights Project.

The panelists addressed how dismal and racist conditions still exist in American prisons. 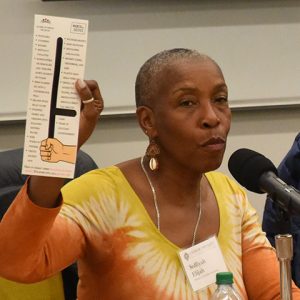 Elijah shared that a popular tattoo among guards in upstate New York is a black baby on a noose. She also showed a video of guards abusing a nonresistant black prisoner and dragging him across the floor while medical professionals watched silently. Such behavior is common in prisons, Elijah noted, except that, usually, it is not recorded and the prisoner ends up in solitary confinement for allegedly assaulting officers.

“People go to extraordinary lengths to make sure that law enforcement is not held responsible,” said Thompson. She revealed that, during research for her book, she was most surprised to learn not only how traumatic the uprising still is for those involved, but also how deep the state attempted to cover up the truth of those historic days. Thompson noted, for example, secret meetings held by Rockefeller.

Today America has more people in cages than anywhere else on the globe, Thompson noted. She called for everyone, no matter her profession, to work in justice’s name. 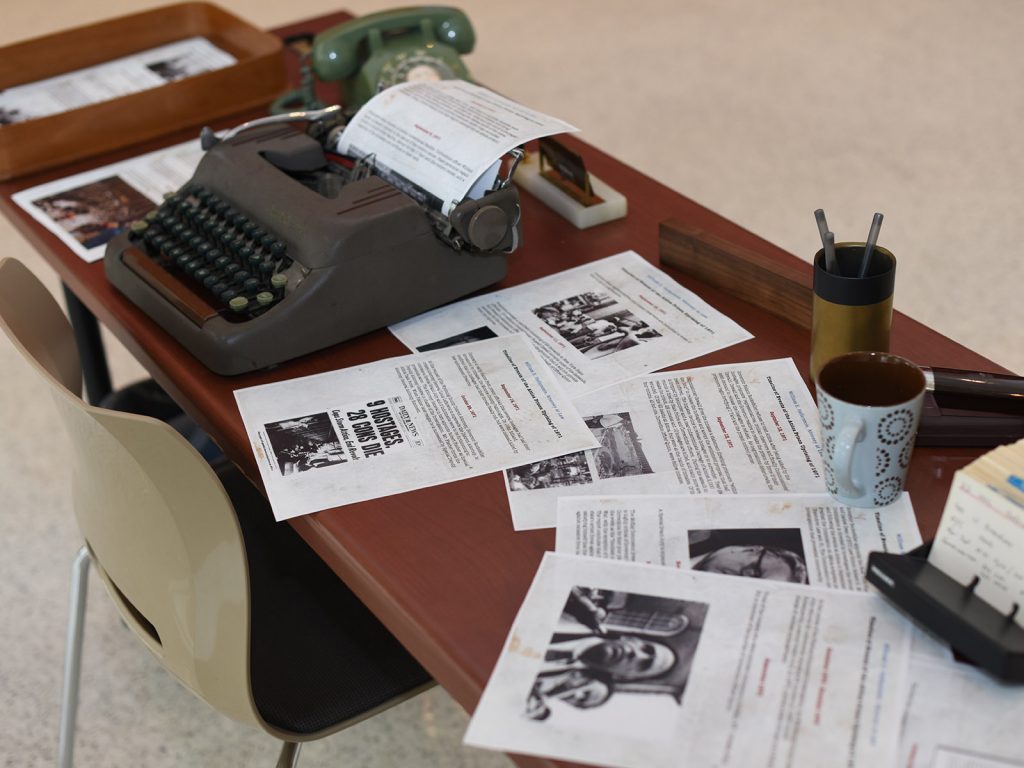 A Stein Scholars exhibit presented a mock desk for civil rights attorney William S. Kunstler, with information about the Attica Prison uprising of 1971

Before the event, Stein Scholars Leanne Fornelli and Milan Sova created a mock desk display centered on William S. Kunstler, a well-known civil rights attorney who defended a prisoner charged with killing a guard during the riot. People were able to learn more about the riot by sifting through papers atop the desk and in its drawers. The display highlighted issues of access to justice arising from the Attica Prison Uprising.