skip to main content
Return to Fordham University
You are at:Home»Inside Fordham»Young Turk Balances Love of Business and Sports 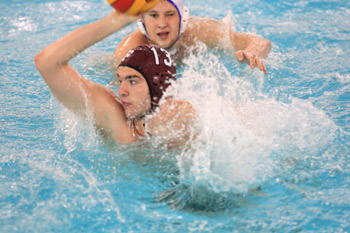 Ali Arat has helped fuel a renaissance in Fordham’s water polo program since arriving from Turkey to study for this MBA.
Photo courtesy of Fordham Athletics

The passion for athletic competition leads many high school sports stars to enroll at colleges far from home. Few students have traveled as far as Fordham water polo player Ali Arat, 21, a native of the Republic of Turkey.

Arat wanted to study for a master’s of business administration degree in the United States. Part of his dream was finding a school that would allow him to pursue his love of water polo.

“There are no athletics at colleges or universities in Turkey,” the 6-foot-6-inch Arat said. “There’s no way to be a really good student and really good athlete at the same time in Turkey. Either you’re a good student or a professional athlete. The only way to find balance is if you’re doing an amateur sport, like water polo or swimming.”

For example, Arat played for the Turkish national water polo team while pursuing his undergraduate degree at KOC University.

Balancing school and sports was often challenging, he said. Professors back home did not allow him to reschedule exams if they conflicted with tournament dates, so he often had to skip key games.

“It’s so different here,” he said. “All of the friends I’ve made, even my professors, really respect what I am doing.”

Arat is a top student specializing in finance. He is a graduate assistant for Francis Petit, Ed.D., assistant dean of the Graduate School of Business Administration and director of executive programs, and Ilhan Akbil, associate dean for corporate outreach and international programs.

Some would argue his work in the pool is even more impressive.

In late January, Arat received an honorable mention from the Association of Collegiate Water Polo Coaches’ (ACWPC) for its 2009 All America team. He is the first Fordham water polo All-American since Eric Weber in 1982.

As first seasons go, Arat had one of the best in Fordham history, earning multiple awards by the end of 2009. He was selected as the Collegiate Water Polo Association (CWPA) Northern Division Rookie of the Year and Rookie of the Eastern Championship, while also garnering First Team All-East and All-Northern Division honors.

Arat was among the Rams’ top scorers, as well as ranking in the top 10 nationally for most of the year. He tied for the team lead in points with 79, and ranked second on the squad with 71 goals, which was the fourth-best single season total at Fordham. With Arat, Fordham reached the Eastern Championship for the first time in 24 years.

“He’s a fine young man and a leader on the team who makes those around him play better,” said Bill Harris, Fordham’s water polo coach. “He’s had quite an impact. He is dedicated and works very hard at every practice.”

Arat takes classes at the Lincoln Center campus, so it takes some effort to schedule his classes and graduate assistantship duties in concert with practices held at the Rose Hill campus in the Bronx. But he said he appreciates that he no longer must try to squeeze in studying in between matches, as he did in Turkey.

“The frequency of games is higher here, but it’s nice that the NCAA works with schools so that when finals arrive, the teams aren’t playing anymore,” he said.

As for his teammates, Arat said he has made the best of friends.

“They didn’t know what I was going to be like. They just knew some kid was coming from Turkey,” he said. “At first it was really hard to communicate because I was speaking English very properly. I didn’t know any slang that is popular here. After a while I just got used to it.”

“One thing that really surprised me is American people love getting into lines. Even if you want to get a gyro, you have to get into a line of 50 people,” he said with a chuckle. “It’s nice that people are respectful for the most part, but getting into long lines isn’t fun.”