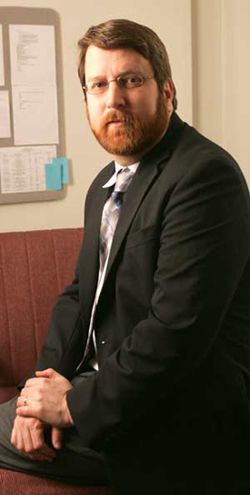 Terry A. Osborn, Ph.D., professor and chair of the Division of Curriculum and Teaching at Fordham’s Graduate School of Education.
Photo by Bruce Gilbert

Can a language be separated from the culture in which it’s taught? Terry A. Osborn, Ph.D., professor and chair of the Division of Curriculum and Teaching at Fordham’s Graduate School of Education, doesn’t think so.
In fact, Osborn, a former University of Connecticut professor who came to Fordham in 2006, said the state of foreign language teaching in the United States is directly linked to the nation’s complicated and contentious attitudes about immigration.

“There’s absolutely a relationship between language education programs and the national, social, cultural and historical contexts in which they function,” he said.

The problem is that foreign languages are presented in a vacuum, said Osborn, a former high school German instructor for six years. The result is a situation that is familiar to many adults: After taking classes for roughly two years in high school and possibly another three years in college, students end their language training without the ability to converse effectively.

This is not surprising, Osborn said. According to the Foreign Service Institute, the time it takes to train United States diplomats to speak even the most accessible of Romance languages is more than what the average student receives, which is only about 50 minutes, five days a week, over several years. Add to this the fact that it is ideal to learn a foreign language in grammar school, not high school, and the lack of proficient speakers makes perfect sense.

“So the question then becomes, ‘What is the purpose of this language-education experience?’” Osborn said. “If we know it’s not going to produce proficient people, why are we surprised when most people leave our educational system and can’t speak the language?”

Osborn explained that there is a notion in the United States that a truly educated person is someone who is open to ideas, beliefs and languages of other places. But closer to the truth is that people are often fearful of individuals and groups who communicate in a way others can’t understand.

There is a fear that if more people spoke languages other than English, it might cause a huge shift in the social power structure. After all, he said, power comes from relationships, and relationships can be solidified through language.

“If a person came here who spoke Mandarin, and could call up a senator who also spoke Mandarin and have a conversation with him or her, that shared language would create an incredibly different type of access to the corridors of power than would otherwise exist,” Osborn said.

Because the U.S. has no official language, these fears take on added weight.

“As a result, my conclusion is there is a symbolic nod to linguistic diversity, but we don’t actually have any expectation as a society that our population is going to become multilingual,” he said.

This isn’t to say that Osborn advocates making English the official language of the United States, but in books such as Critical Reflection and the Foreign Classroom (Bergin & Garvey, 2000) and The Foreign Language Educator in Society: Toward A Critical Pedagogy (Lawrence Erlbaum, 2002), he has advocated drawing upon students’ locations to craft lessons that are more relevant to them.

“As a profession, we have not done a very good job of that,” he said. “We’ve assumed, well, if you can teach languages here, it’s the same no matter where you’re teaching them around the world.

“I would argue that’s just not the case.”

For example, Osborn recalled how a common conversation practiced in high school German classes focuses on the topic of hobbies.

“I have yet to meet a student from the United States who goes overseas and strikes up a conversation on the train and asks ‘What are your hobbies?’ It’s just not what people talk about,” he said. “So why do we restrict the curricula of a foreign language class to this idea that everyone has been transported overseas and they’re meeting two or three people. Why not talk about German speakers you might find in the United States? There’s Schurz Avenue in the Bronx, named after Carl Schurz. What’s the story of Carl Schurz? Do people know that story? This is part of the environment we live in, and I argue that language classes are a place where those conversations should take place.”

Study abroad experiences aren’t an easy answer either, as Osborn said trips to foreign lands can actually reinforce a student’s existing mental stereotypes when coupled with poor language education practices back home. Ironically, this is a function that language serves in the United States. As studying biology helps people put the natural world into context, Osborn said language is the fabric of people’s social lives, which is why it’s often used to discriminate.

“It’s one of the last realms in the U.S. where blatant discrimination is still accepted,” he said. “You can’t do it by race, religion, sexual orientation or gender—these are the things you get called out on.”

Now that he has finished editing Interdisciplinary Education in the Age of Assessment (Lawrence Erlbaum Associates, 2008), a book that taps into his interest in helping different disciplines work together, Osborn plans to return to the sociology of foreign language education.

“If we don’t know what we’re not understanding about language and language diversity, then we as a country are going to be more marginalized on a global stage, because a lot of what we do think about languages in the United States is demonstrably false,” he said. “And the irony is that language knowledge—far from being a thing that we can leave behind us—is even more important now.”