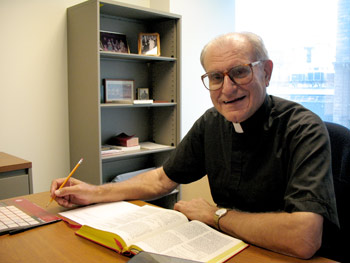 Since September 2004, Joseph Novak, S.J., served as Fordham’s alumni chaplain. He will be remembered as a colleague, mentor and friend.

Joseph Novak, S.J., alumni chaplain and longtime member of the Fordham family, died after a brief illness on Sunday, Jan. 10, 2010, at Montefiore North Hospital in the Bronx. He was 82.

“Our hearts are heavy today, for we have lost an elder brother, a wise colleague and dear friend in Father Joe Novak,” said Joseph M. McShane, S.J., president of Fordham. “His service to Fordham and to the church was both long and distinguished. Generations of Fordham students will remember Father Novak for his wit, gentleness and warmth, in and out of the classroom.”

Father Novak was born on March 14, 1927, and entered the Society of Jesus at St. Andrew-on-Hudson, Poughkeepsie, N.Y., on Feb. 1, 1945. He was ordained to the priesthood on June 22, 1957. He was a graduate of Xavier High School, Woodstock College and the International Catechetical Center at Lumen Vitae, in Brussels.

Before coming to Fordham in June 1962, where he served as an instructor in the Department of Religion and Religious Education and at Fordham Preparatory School, Father Novak taught at Saint Peter’s Preparatory and McQuaid Jesuit High School.

Since September 2004, Father Novak served as Fordham’s alumni chaplain, providing pastoral care to graduates and their families, developing and leading alumni retreats, and offering a series of continuing education programs to graduates. He was a gracious colleague, a mentor and a friend to the Development and University Relations staff.

Father Novak is survived by his brother, Vincent Novak, S.J., founding dean of Fordham’s Graduate School of Religion and Religious Education, and his sisters Lucy Novak and Antoinette Frees, and members of the Spellman Jesuit community. Father Novak’s parents, Spiro and Pauline Novak, are deceased.