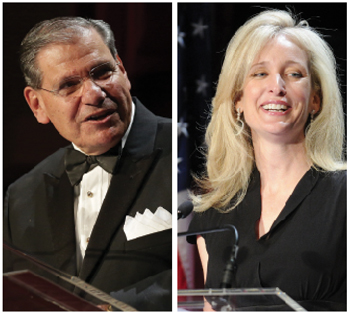 As New York City showed signs of an early spring, the Fordham community assembled on March 26 to celebrate its own transformations, and those who make them possible.

Students, alumni, faculty, administrators, and friends of the University gathered at the 11th annual Founder’s Award Dinner, in the Waldorf Astoria Grand Ballroom, to pay tribute to Fordham’s most devoted benefactors and their beneficiaries.

The heart of the annual gala, the Presidential Scholarship Fund supports young women and men who demonstrate a desire for excellence in all aspects of life, and whose characteristics reflect the qualities shared by Fordham’s founders. Twelve presidential scholars were in attendance. 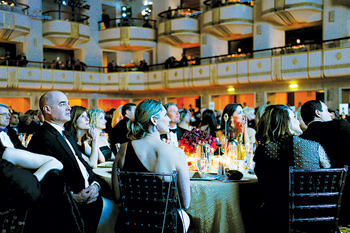 Joseph M. McShane, S.J., president of Fordham, told a crowd of more than 1,000 guests that the annual dinner embodies the spirit of Fordham, and of Jesuit education.
Photo by Jon Roemer

Joseph M. McShane, S.J., president of Fordham, told a crowd of more than 1,000 guests that the annual dinner embodies the spirit of Fordham, and of Jesuit education.

“When you put it all together, what is a Jesuit education all about? It is nothing less than empowerment and transformation—and our graduates emerge from their experience at Fordham as recognizable Jesuit graduates,” he said. “They are men and women of competence, conscience, compassion, and commitment to the cause of the human family.”

Jordan, a Rose Hill graduate who earned a law degree from Suffolk University, worked as an assistant district attorney, and later as assistant attorney general in Massachusetts. Besides working for the nonprofit organization that supports the arts, education, and health and youth services, Jordan is an active philanthropist/fundraiser, and is a member of Fordham’s Board of Trustees.

Father McShane lauded Jordan’s willingness to “do whatever it takes” to promote projects in service for others.

“My involvement with Fordham has been one of my greatest pleasures,” Jordan said. “Being on the Board has provided me with unique insight into the true workings of the University. I’ve gotten to witness firsthand the dedication to excellence that all people associate with the school.”

Tognino was introduced by Father McShane as “a true man for others.” He serves as vice chairman of the St. Barnabas Hospital Board of Trustees, and president of the Board of Directors at Union Community Health Center. 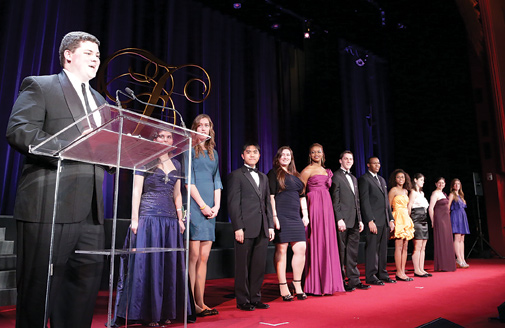 Though Tognino has also served for the last eight years as chair of the University Board of Trustees, his connection to Fordham began well before he matriculated as a student.

A native of the Bronx, Tognino grew up “in the shadow of Keating Hall.” He had to defer his college education for financial reasons upon graduating from high school. But after 15 years in the workforce, he returned as an undergraduate in what is now the School of Professional and Continuing Studies.

“I came to Fordham late in life,” Tognino said. “Fordham opened its doors to me, and gave me a chance.

“It’s a short distance from the Bronx to this stage, but it is a long journey,” he said, thanking in particular his wife, Norma, who joined him onstage to receive the award.

Earlier in the evening, Father McShane and Tognino presented the historic Insignis Medal to Mario Gabelli, GSB ’65, and Regina Pitaro, FCRH ’76. It was the 25th time since its creation in 1955 that the medal has been awarded. It distinguishes individuals who have transformed the University, and whose service to God and humanity is “ardent and unstinting.”

“Mario and Regina share an inviolate belief in education as the great equalizer, the heart and soul of the great American experiment,” said Father McShane, describing how the pair had reinvigorated Fordham’s business education by making the largest gift in the University’s history, to fund the Gabelli School of Business (GSB).

Speaking on behalf of the presidential scholars was Dan Hegarty, a GSB senior who, upon graduating in May, will begin an M.B.A. program while working as an auditor at PricewaterhouseCoopers.

“You made Fordham happen for us,” Hegarty told those benefactors in attendance. “Without your immense generosity, the 12 people you see on this stage would not have had the chance to attend thisincredible University.

“I look forward to the day when I sit with you as a Fordham Founder’s donor.”